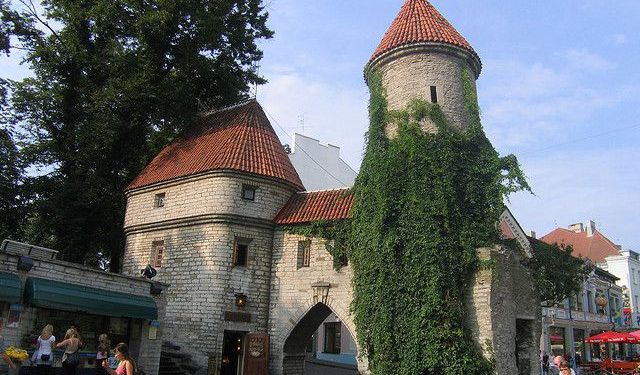 Image by daneen_vol on Flickr under Creative Commons License.

Tallinn was once Europe's greatest fortified city and still houses a vast range of magnificent defense towers and historic gates. These unique constructions are a precious treasure of medieval architecture and have played witness to an important time of the world's history.
How it works: Download the app "GPSmyCity: Walks in 1K+ Cities" from iTunes App Store or Google Play to your mobile phone or tablet. The app turns your mobile device into a personal tour guide and its built-in GPS navigation functions guide you from one tour stop to next. The app works offline, so no data plan is needed when traveling abroad.

This location is called Pikk Hermann or the Tall Hermann Tower. It is located at Toompea Castle in Tallinn, Estonia, on the hill that carries the same name. It is situated next to the Estonian Parliament building. The flag of Estonia always flies here on the tower, which reaches up 95 meters into the air at the top of the flag pole. The original structure was begun in 1360, and ended up taking a whopping 40 years to complete. Later, the height of the tower was increased to 45 meters in the 16th Century.

The tower itself consists of ten floors, along with a viewing platform. A total of 215 stairs were added to allow access to all floors, including the viewing platform. During the raising of the flag of Estonia here each day, you can hear the National Anthem played. This typically happens at sunrise, but never occurs earlier than 7:00 a.m. The same event takes places around 10:00 p.m. each evening. The song played is called “My Fatherland is My Love.” So, you get a real chance to see a bit of local patriotism here at the Tall Hermann Tower. It is also fun to go and see the local Parliament Building next door.

Image by Fearless Fred on Flickr under Creative Commons License.
2

The phrase “Kiek in de Kok” derives from German. It’s an old nickname for towers that are part of some fortified structure. Occupants of the tower used to be able to peek down into the kitchens of nearby homes. In the case of the tower located in Tallinn, it is an old artillery tower.

It was built as part of the impressive fortifications that used to surround the town. This particular tower was added in 1475. It stands an impressive 38 meters high, and is made with walls that are 4 meters thick, which were designed to stand up against canon fire. If you take a look at this structure, you can still see old cannon balls that are embedded into the walls of the tower that date all the way back to the 16th Century.

The old tower has been remodeled a lot during its lifetime. In the 17th Century, some of the lower floors were buried in dirt, and new gun holes were made in the top of the tower. The structure fell out of use by 1760. For a while, it became a repository for archives, and was used for a small time for apartments. You can climb the tower today, though, to get a great view of the city surrounding.

Image by Marcela on Wikimedia under Creative Commons License.
3

The Maiden Tower is another of the old towers that were located along the old fortified walls of the city of Tallinn, Estonia. It can be found in the Old Town Sector, not very far from Town Hall or its sister structure, the Kiek in de Kok. Both of these towers date back to the 14th Century, and have been part of the landscape of the town for many years.

The Maiden Tower has suffered from the damage of war at many different points in its history, and you can see some of the canon damage upon close inspection. It has undergone repair in almost every century since.

One of the most interesting things about the tower is that is used to be used as a prison for prostitutes, which is why it is called the Maiden Tower. In fact, local legend states that some of the old prisoners still haunt the structure. On a clear dark night, you might be able to see the lights of some old ghost roaming the stairs.

During the 20th Century, the tower was turned into a restaurant, which was popular up into the 1990s. You could have a meal, some coffee, and a fine glass of wine, while looking out over the city. Currently, though, the tower is not used at all.
Image by alexkon on Flickr under Creative Commons License.
4

At one point in time, there were a total of 45 towers built into the walls that protected the city of Tallinn, Estonia. Twenty Six of those still remain. Two of the best preserved of the bunch are called Viru Gate. The gate dates from the 14th Century, as do most of the towers, and sits at the entrance way into the Old Town Sector of Tallinn. This old section of the city represents one of Europe’s only surviving medieval towns that still has fortified walls intact, so this is a history buffs place to visit.

In today’s times, the two towers are quite lovely, having been covered in ivy over the years. It gives a gentle look to Viru Street. When you first enter the Old Town through the gate, it makes you feel as though you have stepped back in time.

The towers used to be the fore gates to the city, and a larger set was built a little further in, which were held up by a set of square towers. Most of the gate was pulled down in 1880, in order to make room for more street traffic to get through the area. Since that time, though, the two towers have become a symbol for the Old City, which used to be the most fortified city in all of Europe in the day.
Image by Leo-setä on Flickr under Creative Commons License.
5

The Nunna, Sauna, and Kuldjala Towers are three of the remaining 26 towers that surround the Old Town section of Tallinn, Estonia. In the late 14th Century, a massive project was started to build a fortified wall around the city, in order to protect against invaders. By the 16th Century, the walls were raised to sixteen meters high, and the walls themselves were 3 to 4 meters thick. This made it possible to defend against canon fire during that point in history. Through the 16th Century, Tallinn was the most fortified city in the entire world. The wall stretched 4 kilometers around old Tallinn.

These three towers are special today because they are among the few that are still open to the general public. Tourists can come and walk through all three. In addition, there are some connection paths that are adjacent to the historic standing walls. It gives you a real sense of what the old town was like. Climbing the towers also gives you a great view of the city. You can imagine what it was like to be a guard on the towers. There is no admission fee to visit.
Image by Sargoth on Wikimedia under Creative Commons License.
6

If you take a trip down to the sea along Pikk Street in Tallinn, Estonia, you will find two of the remaining 26 defensive towers for the city. They are the Great Coastal Gate and Fat Margaret Tower. They were designed to protect the city from seafaring invaders, as well as impress visitors that would have arrived in the city by the sea. The message they portrayed was clear: don’t even think about attacking the city from the sea.

The Great Coastal Gate is one of six remaining gates that are still intact from the old city wall system. They controlled access to the city during medieval times. This particular gate was added during the 14th Century. Fat Margaret Tower was added during the 16th Century, while improvements were being made to the fortifications. It was built from 1511 until 1530, and rose 25 meters above the surrounding area. This particular coastal Gate and tower have walls that are actually a little thicker than most of the surrounding structures. They measure up to 5 meters thick. (The average thickness of the city walls is 3 meters.)

The origins of Fat Margaret's name are not well known. The best conjecture is that the tower was named for one of its larger cannons, while others hint at a cook called Margaret who once cooked for the troops that stood guard.

In today’s times, the Estonian Maritime Museum is located in the Fat Margaret Tower. Visitors should take a moment and climb to the top of the tower to get one of the best views in town.
Image by Gunnar Bach Pedersen on Wikimedia under Creative Commons License.

Old Town is the most popular tourist destination in Tallinn. Constructed within the 13th-16th centuries, when Tallinn was an active member of the Hanseatic trade league, the Old Town slowly evolved into an enclosed district of colorful, ancient gabled houses, medieval towers and gates, half-hidden courtyards, and ostentatious churches. Old Town Tallinn is undoubtedly worth a visit.

Tallinn boasts a wide selection of art galleries, most of which are concentrated in the Old Town. The galleries often change their exhibitions every few days, so the experience is always fresh and exciting.