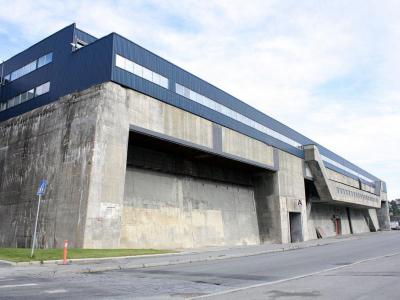 DORA 1 is a former German submarine base and bunker built during World War II in Trondheim. In German, Trondheim was called Drontheim, and the name DORA is the letter "D" in the German phonetic alphabet. Construction of what was going to be the biggest German naval base in Northern Europe started in the autumn of 1941, one year after the WW II invasion of Norway. DORA 1 was handed over to the German Kriegsmarine on 20 June 1943. The bunker, which could be hermetically sealed when attacked, had room for 16 U-boats and housing for many soldiers. It is now the home base of the 13 Unterseebootsflottille.
Image by aslakr on Flickr under Creative Commons License.
Sight description based on wikipedia

This sight is featured in a self-guided walking tour of Trondheim, Norway within the mobile app "GPSmyCity: Walks in 1K+ Cities" which can be downloaded from iTunes App Store or Google Play. Please download the app to your mobile phone or tablet for travel directions for visiting this sight. The app turns your mobile device to a personal tour guide and it works offline, so no data plan is needed when traveling abroad.

Create Your Own Walk in Trondheim

Creating your own self-guided walk in Trondheim is easy and fun. Choose the city attractions that you want to see and a walk route map will be created just for you. You can even set your hotel as the start point of the walk.

Southern part of Trondheim houses many interesting attractions, including old Elgeseter Bridge, green Marinen, the mysterious Nidaros Cathedral Cemetery, the modern New Town Hall, Thomas Angell's Hus, the unique Municipal Bicycle Lift, and the outstanding Kristiansten Fortress. Check out the most popular attractions in the southern part of Trondheim in the next walking tour!

Presiding over the namesake fjord in the heart of Norway, Trondheim the city boasts a great deal of cultural and historic richness. Topping the list of the local landmarks is 11th century Gothic-style Nidaros Cathedral renowned for its intricate ornate facade. Located nearby Archbishop’s Palace Museum showcases archaeological findings and sculptures, including the gargoyles that once adorned the...  view more

Trondheim Canal dates back to the 19th century and is a most impressive sight. By the canal you will find amazing attractions, prominent monuments, cultural venues, historic places, and of course a marvelous view of the sea. Take the following tour to discover the beautiful Trondheim Canal area!