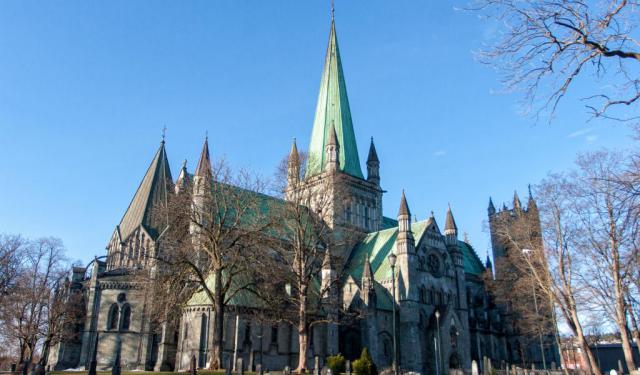 Renowned for its broad cultural scene and a rich, long history, Tronheim is without a doubt one of Norway's most photogenic cities. A visit here is like a journey through 1000 years, where exciting experiences await practically around every corner.

Much of Trondheim’s historic asset – colorful warehouses, centuries-old listed wooden buildings, medieval churches and other prominent landmarks – is found in the city's partly pedestrianized heart, a fascinating district with much to explore. There is a wealth of cultural heritage that greets visitors along the tranquil waterways and streets, set against the backdrop of wooded hills. Here's some of it:

Nidaros Cathedral – Europe's northernmost Gothic cathedral, a national shrine and a must-visit place for those looking to explore the region's religious history; completed in 1300;

Historic Wharves – these colorful piers framing the Nidelven are perhaps the most distinctive and most photographed buildings in the city (particularly beautiful when reflected in the river);

Gamle Radhus (Old Town Hall) – a two-story structure with a Hanseatic facade, featuring an eight-pointed star-shaped window and the seal of the city; built sometime in the 18th century;

If you're interested in history and would like to step back in time whilst immersing yourself into the distinctively Norwegian atmosphere, take this self-guided walking tour of Trondheim and discover some of its most outstanding ancient architecture!
Image Courtesy of Flickr and Bruno Jargot.
How it works: Download the app "GPSmyCity: Walks in 1K+ Cities" from iTunes App Store or Google Play to your mobile phone or tablet. The app turns your mobile device into a personal tour guide and its built-in GPS navigation functions guide you from one tour stop to next. The app works offline, so no data plan is needed when traveling abroad.

King Olav II reigned in Norway from 1015 to 1028. He is also Saint Olav, the patron saint of Norway. Nidaros Cathedral was built to be the burial site of Saint Olav. It took over 230 years before it was complete in 1300. The cathedral has also served as the coronation site of the kings of Norway.

The cathedral was named Nidaros, after the original name for Trondheim. It was Catholic until 1537, when it was swept up in the Protestant Reformation and taken over by the New Church of Norway. It is the world's northernmost medieval cathedral.

The great stone church can seat 1,850 souls. It shows Gothic and Romanesque architectural influences. In 1814 the cathedral served as a polling station in Norway's first national election.

There were fires in 1327 and again in 1531. In 1708 the cathedral was totally burned down, leaving only the stone walls. In 1719 it was struck by lightning and once more burned.

Restoration began in 1869. It was declared completed in 2001 but maintenance of the structure continues. The west facade of the cathedral is alive with carved figures and animals. Only five of the actual medieval statues have survived intact. Those not unscathed can be found in the Archbishop's Palace museum.

Saint Michael perches at the highest point of the north tower, wings spread while he sticks it to the devil in the form of a dragon. The facade is covered with masks, angels, gargoyles and as many creatures as can be imagined.

The octagon shaped choir and its ambulatory are the oldest parts of the Cathedral. The ambulatory is joined to the choir by a stone screen with three arches. The center arch frames the figure of Christ the Teacher. At the site of the medieval high altar is a silver reliquary holding an arm of St. Olav.

A second altar is in the intersection of the transept and the nave. The altar holds a modern crucifix commissioned by Norwegian-American immigrants of the 20th century.

Each year Nidaros cathedral is the venue for Olav's Wake, the anniversary of Saint Olav's death.

The house consists of 50 apartments that have been in continuous use since their construction. It was rebuilt in 1903 and a massive restoration project took place in 1980 when new windows, new roofs and electricity were installed. More restorations took place from 2009 to 2015. Completed projects include television cable, a modern elevator and a new heating system. Along with the apartments, Thomas Angell House has a party hall, a library and a chapel.

All residents stayed for free in Thomas Angell House from the time the building was constructed through 1970. Residents also received monthly allowances from the foundation until Norway enacted a government-sponsored foundation for the elderly.

Thomas Angell House has a Baroque facade and a large courtyard that is available to guests. A large monument to Thomas Angell is featured in front of the building. It includes a plaque and a bust of Angell.
Image Courtesy of Wikimedia and Jensens.
3

The historic wharfs of Trondheim are known as some of the most distinctive buildings in the city. The buildings stand along both sides of the Nidelven River's channel where they were originally used as storage for such goods as grain, sugar, salt and fish.

The buildings were completed in the 17th century but most were lost in a fire in 1681. The rebuilt wharf buildings were made to look as similar to their ancestors as possible. They were created using the traditional technique of interlocking logs, bare wood interior and simple construction.

The original wharfs were not used as homes but that has changed. Today, most of these colorful buildings are residential houses. Others are art galleries, coffee shops, restaurants and unique boutiques.

The cobbled walking paths make exploring the historic wharfs an easy and beautiful stroll. There are also a number of benches along the paths for those who want to relax. The Old Town Bridge over the Nidelven River is a great spot to get a picturesque view of the historic wharfs from a distance.
Image Courtesy of Wikimedia and Sonja Olaussen.
4

On Kongens Gate, opposite the Children's Technological Museum, is the Old Town Hall of Trondheim. It is a two story building with a Hanseatic facade, featuring an eight-pointed star-shaped window and the seal of the city.

Behind the peak of the center section of the facade is a square-shaped tower topped with a pyramid roof. The square tower portion is topped by an octagonal smaller tower with a pointed roof and spire.

The Old Town Hall was built sometime in the 18th century. It has been replaced as a town hall by the New Town Hall, close to the Cathedral. There is no public business conducted any more at the Old Town Hall. It functions today as part of the city's library.

In the old days the Hall was not only the city's government center, until 1863 it was also the notorious city jail. The jail lay under the Old Town Hall. The floors of the cells were earth. There was little sanitation and the cells were often overcrowded. The stench from down below caused the burning of incense above.

A more enlightened prison policy came along eventually. The old times are not remembered fondly. The New Town Hall does not smell bad and the Old Town Hall does quite well as a library.
Image Courtesy of Wikimedia and Diego Delso.
5

Our Lady's Church was originally called Saint Mary's Church (Mariakirken). It was constructed in the late 1100s by architect Bjorn Sigvardsson. The plan is of a "Long" church, peculiar to Scandinavia, especially Norway. The nave is one long room with a flat ceiling. The church is of stone, plain, but with Romanesque and Gothic elements.

In 1651 the church and most buildings in Trondheim were destroyed by fire. It was rebuilt and redecorated only to be burned again in 1681 and again in 1708. In rebuilding, the church nave was extended to the west. The resulting length became 210 feet.

Major renovations had taken place by 1779. A new tower with a pyramid roof and spire had been installed and the church had acquired a baroque ambience. In the 19th century, under the direction of architect Christian Christie, most of the Baroque and Rococo elements of the interior were eliminated.

During the period 1957 to 1959 John Egil Tverdahl restored the church to its original medieval stone appearance.

The altarpiece was carved by Heinrich Kuhnemann in 1744. It was originally meant for Nidaros Cathedral. In 1837 it was moved to Our Lady's Church. It was painted by J. N. Schavenius. The pulpit was restored in 1959. The baptismal font dates from 1898.

The church is always welcoming and open for prayer and meditation.
Image Courtesy of Wikimedia and Jensens.
6

Stiftsgarden, otherwise known as the Royal Residence, has been in use by royalty since 1800. It is though to have been designed by Admiral Christian Lerche in the Baroque, Rococo and Neoclassical architectural styles. The Royal Residence is thought to be the largest wooden building in Northern Europe. The building has 140 rooms and over 43,000 square feet of space.

Construction of Stiftsgarden was completed in 1778 for Cecilie Christine Scholler. The wealthy widow of a merchant and daughter of Norway's Commander in Chief, Scholler's goal was to have the largest private home in the city. The building was bequeathed to Scholler's grandson upon her death in 1786. It was then sold to Norway in 1800.

Stiftsgarden was used for many purposes before being solely used as the royal residence. It served as a courtroom, government offices and the Bank of Norway along with a temporary home for government entities and their guests. The building became a permanent royal residence in 1906.
Image Courtesy of Flickr and NTNU.
7

The Trondheim Hospital Church, is an octagonal, wooden building constructed in 1705. It is known to be the oldest octagonal church built in Norway. The church, built next to Trondheim's Hospital, became the model for more than 60 churches built in the country.

Unlike many of the buildings in Trondheim, the Trondheim Hospital Church was not destroyed by the great fires of 1708 and 1842. Much of what stands today was part of the original plan drawn by Hempel.

Trondheim Hospital Church is located on Kongens Gate and Hospitalsgata. Cobbled walkways give access to the church and its park-like greenery.
Image Courtesy of Wikimedia and Mahlum.
8

Ilen Church, known as Ilen Kirke in Norwegian, is a parish church of the Church of Norway. It was built in 1889 to a design by architect Eugene Sissenere in the Neo-Gothic architectural style. It was the first post-Reformation church built in the city.

The church is made of grey stone with carved facades. Due to financial hardships, the planned vaulted brick ceilings were instead made with wood. Ilen Church has a Renaissance-style altarpiece that dates to 1932 and a 19th century organ built by Claus Jensen.

It is said that St. Olav, the patron saint of unity, died on the grounds where the church lies. The stone on which he is thought to have passed is still intact. A statue of a girl with an ox, known as An-Magritt and the Hovi Ox, is also on the church grounds. The statue was crafted by Kristofer Leirdal in 1967.

The church is located on the isthmus between the Nid River and the Trondheimsfjord. Those who wish to enter the church may not find it open but they are welcome to explore the church grounds and admire the architecture.
Image Courtesy of Wikimedia and Jensens.

Create Your Own Walk in Trondheim

Creating your own self-guided walk in Trondheim is easy and fun. Choose the city attractions that you want to see and a walk route map will be created just for you. You can even set your hotel as the start point of the walk.

Trondheim was the first capital of Norway. It is the place where kings are consecrated. It is idyllically located on the river Nidelva within easy access to the sea. It has been the home of saints and warriors. It is called Trondheim. "Trond" is a "good place." "Heim" means "home." It is not too big a stretch to say "Trondheim" is a "good...  view more