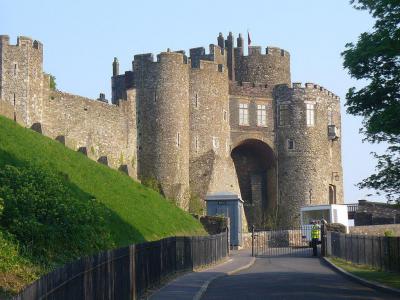 Dover Castle is a stunning medieval castle that stands upon Castle Hill above the famous White Cliffs of Dover. Building began on this fortress-like castle during the 11th century. Dover Castle has often been called the "Key to England" because of its strategic position at the shortest crossing between continental Europe and England.

This grand hilltop structure features high walls and stately towers. Dover Castle is one of the largest castles in England, and there is plenty to see. The lavish interior of the Great Tower features decorations that recreate the regal rooms of a medieval castle. A feast for the eyes with magnificent furnishings, colorful tapestries, and over 500 objects. Costumed characters perform on selected days.

Beneath the castle is a network of medieval tunnels constructed for defensive purposes. These winding passageways are open for visitors to explore. Tours are available to discover the secret wartime tunnels of Dover Castle, used during World War II. An exhibition brings the history of the Dunkirk evacuation to life as you learn about the story of tunnels.

There are 80 acres of grounds around the castle, a great place to explore. An octagonal-shaped Roman lighthouse is an impressive structure built in the early 2nd century. It is one of only a few lighthouses in the world that has survived from the time of the Roman empire. This lighthouse later served as the bell tower at St Mary in Castro, a church on the Dover Castle grounds built around AD 1000. Still a working church, there are worship services each Sunday.

If you're hungry, you'll find a restaurant, a cafe, a tearoom, and a picnic area at Dover Castle. There is also a museum and two shops. Climb up to the roof of the Grand Tower for some magnificent views.
Image Courtesy of Wikimedia and Colin Smith.