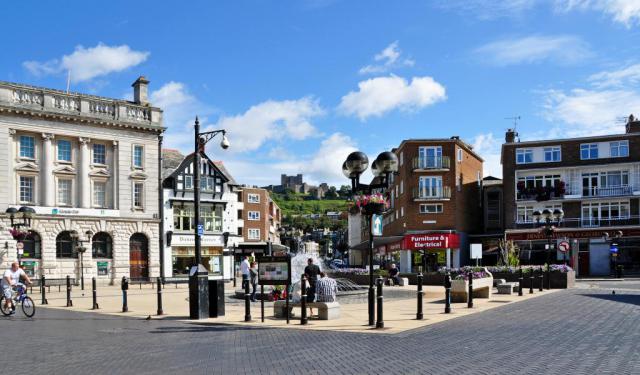 Dover is a beautiful city known for its lovely port that is the major port in southeast England. Due to its position, the city was invaded and needed a strong and powerful defense that was possible due to strong and tall forts and castles. Dover is also known for its beautiful, green areas, well known buildings and landmarks that must be visited and admired.
Image Courtesy of Wikimedia and Immanuel Giel.
How it works: Download the app "GPSmyCity: Walks in 1K+ Cities" from iTunes App Store or Google Play to your mobile phone or tablet. The app turns your mobile device into a personal tour guide and its built-in GPS navigation functions guide you from one tour stop to next. The app works offline, so no data plan is needed when traveling abroad.

The Dover Museum was founded in February 1836 by the town's mayor Edward Pett Thompson and was initially housed in the old Guildhall and run by the Dover Philosophical Institute. The Town Council formally took it over 12 years later, constructing a new building to house it and the town's market, in Market Square.

Shelled from France in 1942 during the Second World War, the Museum lost much of its collections, including nearly all of its natural history collections. Much of the surviving material was left neglected in caves and other stores until 1946, and it is estimated only 30% of the pre-war collection survived to that date. In 1948 a 'temporary' museum was opened in the Town Hall's undercroft, but this, in fact, lasted until 1991, when a new museum building on three stories was opened in Market Square.

On 20 July 1999, the Queen opened a new gallery on the Museum's second floor centred on the Dover Bronze Age Boat that dates to 1575–1520 BC, which may make it the oldest substantially intact boat in the world (older boat finds are small fragments, some less than a metre square). In December 2000, this gallery was awarded the British Archaeological Awards ICI Award 2000, for its contribution to archaeological knowledge.


Image Courtesy of Wikimedia and Nessy-Pic.
Sight description based on Wikipedia.
2

St. Mary the Virgin Church represents the main and most impressive church of the town. It is said that the Saxons established this church and then Normans and Victorians continued to add some elements to it. The church was closed during the life of King Henry VIII but reopened in 1544. In the nineteenth century it was rebuilt and enlarged, giving it a new image. Some arches and towers were rebuilt using stone and giving them a modern, more fashionable look. The parish has a nice choir that sings religious songs at every church service. It also has a youth club where children are taught how to pray and how to glorify God.
Image Courtesy of Flickr and Frans van Rijnswou.
3

3) The Roman Painted House (must see)

During the Roman invasion of Britain, Dover was one of the principal ports of the empire. A great amount of money was spent by the Romans to construct buildings. One of the finest in Dover was discovered in the 20th Century and opened to the public as the Roman Painted House. The museum has on display an elaborate series of rooms, each bringing alive the Roman way of life to the modern visitor.

Dover Town Hall is a beautiful place where different ceremonies are held on different occasions. It seats up to 500 guests and has many different rooms. The entrance is large and can be accessed via a flight of steps. Now it is managed by Thanet Leisure Force. The Hall is open all year round and even civil marriages take place here.
Image Courtesy of Wikimedia and Immanuel Giel.
5

The Hospital of St Mary, Domus Dei, or Maison Dieu, is a medieval building in Dover, which forms part of the Old Town Hall buildings. It was founded in 1203 by Hubert de Burgh, the Constable of Dover Castle, as the "Hospital of the Mason Dieu" to accommodate pilgrims coming from the Continent to visit the shrine of Thomas Becket in Canterbury Cathedral. de Burgh gave the manors of River and Kingsdown to the hospital in order to fund it.

The original buildings consisted of one large hall with a kitchen and living quarters attached for the Master and Brethren who 'practised hospitality to all strangers'. The hospital accommodated permanent pensioners and other wounded and poor soldiers, as well as pilgrims. In 1834, the building was sold to the Corporation of Dover who used the Maison Dieu as the Town Hall. At first, the building was used by the Town Council with minimal restorations. Eventually, the Council turned the old chapel into a courtroom and built a prison below. The Council decided to fully restore the building, and in 1851 they agreed to implement renovations suggested by Victorian architect Ambrose Poynter.
Image Courtesy of Diane French.
Sight description based on Wikipedia.
6

St Paul’s Church is a Roman Catholic Church that dates back to 1868. It was damaged during the Second World War and subsequently restored several times. At the time, it required some new elements of restoration that added to the services. Today it is a beautiful church that holds services and transmits God's wishes. It attracts a person through its simplicity and peacefulness and brings internal peace.
Image Courtesy of Flickr and Mike M.
7

Dover Castle is a medieval castle in the town of the same name in the English county of Kent. It was founded in the 12th century and has been described as the "Key to England" due to its defensive significance throughout history. It is the largest castle in England.

Dover Castle is a Scheduled Monument, which means it is a "nationally important" historic building and archaeological site that has been given protection against unauthorized change. It is also a Grade I listed building, and recognized as an internationally important structure. The castle, secret tunnels, and surrounding land are now owned by English Heritage and the site is a major tourist attraction. The Lord Warden of the Cinque Ports is officially head of the castle, in his conjoint position of Constable of Dover Castle, and the Deputy Constable has his residence in Constable's Gate. Between 2007 and 2009, English Heritage spent £2.45 million on recreating the castle's interior. According to figures released by the Association of Leading Visitor Attractions, nearly 350,000 people visited Dover Castle in 2010.
Image Courtesy of Flickr and HBarrison.
Sight description based on Wikipedia.
8

The White Cliffs of Dover are cliffs that form part of the English coastline facing the Strait of Dover and France. The cliffs are part of the North Downs formation. The cliff face, which reaches up to 350 feet (110 m), owes its striking appearance to its composition of chalk accentuated by streaks of black flint.

The cliffs have great symbolic value in Britain because they face towards continental Europe across the narrowest part of the English Channel, where invasions have historically threatened and against which the cliffs form a symbolic guard. The National Trust calls the cliffs "an icon of Britain", with "the white chalk face a symbol of home and war time defence."
Image Courtesy of Flickr and Mark Hoogenboom.
Sight description based on Wikipedia.