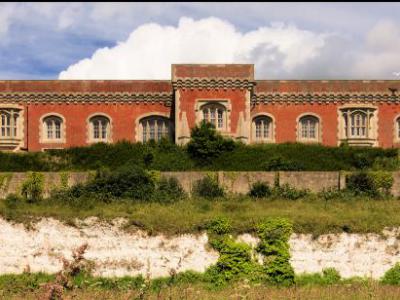 Dover Citadel is part of the impressive Western Heights fortifications. Its origins began during growing threats of the French invasion in the late 18th century. At this time, an improved defense system on the hill was planned. A citadel was to be constructed on the western side and a redoubt on the eastern side, with defensive lines connecting them.

Eventually, two forts were built on Western Heights, the other being the Drop Redoubt. By 1859, after a perceived threat by Napoleon III, enhancements were made to the Citadel to improve the fortification. Strengthening with brick walls was done to the wide defensive ditches. These walls contained positions for guns. New additions to the fortification included a drawbridge, officer's quarters, a guard room, and a gatehouse.

After 1890, the Citadel was mainly used as a military barracks. Since the 1950s, it has served as a prison, an institute for youth offenders, and an immigration removal center.
Image Courtesy of Flickr and Ted and Jen.