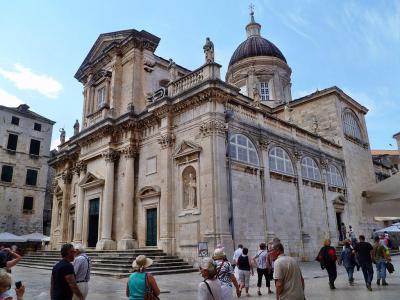 The Dubrovnik Cathedral, otherwise known as the Cathedral of the Assumption of the Virgin Mary, is an imposing structure that, over the years, has undergone many drastic changes. The original cathedral of Byzantine style was built in the 6th century, although a church of some sort had been on this site long before that. The entire building was redone in a construction project that had lasted over 100 years, starting from the 12th century, and resulted in a more Romanesque style of the building.

Local legend has it that the change was financed by King Richard the Lionheart after his rescue here during one of the campaigns. Like most buildings in Dubrovnik, the cathedral suffered major damage during the great earthquake of 1667, after which it was rebuilt in a Baroque style.

On the inside, there is a beautiful painting of the assumption of Mary, done by Titian around 1552, along with a copy of Raphael’s “Virgin of the Chair”. The local sacred art collection is also worth a look, as it is typical of the type of work being done here during the 1500s.

Why You Should Visit:
Albeit smaller than expected on the inside, Titian's polyptych, as well as the very unique and simply beautiful Stations of the Cross, really make a visit here worth the while.
At night, the cathedral is lit and becomes a magical place, which keeps its old aspect – there are no restaurants/bars in the area, just people passing and old stones.

The Treasury within the Cathedral displays a wide collection of religious objects, such as bronze and gold vessels, jewelry, as well as 132 relics of the saints dating from the 11th to the 19th centuries. Among these are the priceless head, arms and leg relics of St. Blaise, the patron saint of Dubrovnik, dated between the 11th and 12th centuries, crafted by the city's goldsmiths.