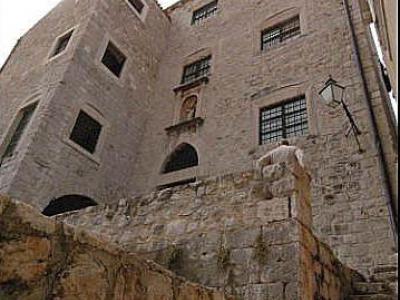 The Ethnographic Museum of Dubrovnik is housed in a 16th century building, originally designed as a granary. The Republic of Dubrovnik used to keep here their national grain supply, so its importance is hard to overestimate. Interestingly enough, the building was one of the few in the city to have survived the great earthquake of 1667 practically unscathed.

Today, the museum collection illustrates what life was like for the common folk of the region in the old days. Among the exhibits are pieces of ancient clothing, including ceremonial costumes worn during festivities, the old Rector’s robes and other garments. There is some beautiful artwork featuring local wildlife, too. A good portion of the display is dedicated to the agrarian theme: local farm tools and appliances, various pieces of equipment used with farm animals, etc. Also, since this is a former grain mill, you will find here plenty of information on how the culture went about saving the grain to survive long winters, and more.

Why You Should Visit:
Beautifully displayed collection, small enough to explore in ~90 min max; all captions are in English. Knowledgeable and friendly staff are willing to answer questions.

Tip:
The ticket office will offer the 'Museums of Dubrovnik' pass – good for 9 museums / 7 days (this is helpful as not all museums are open everyday). This the only way you can gain access inside.