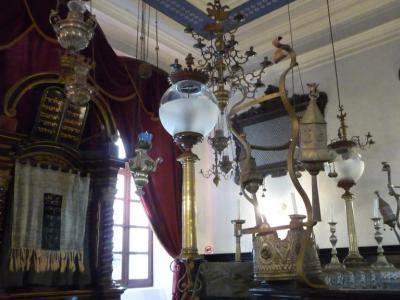 The Dubrovnik Synagogue is amazing for several different reasons. It is the oldest Sephardic synagogue still in use today in the world and the second oldest synagogue in Europe. It may also be one of the smallest synagogues, in terms of physical size. Because of the small number of Jews in Dubrovnik, the synagogue does not have its own rabbi. On holy days, a visiting rabbi would conduct services for the small community.

Located in one of the many tiny streets of the Old Town of Dubrovnik, it is connected to a neighboring building which has long been owned by the Tolentino family, who have been caretakers of the synagogue for centuries. The internal layout is different from other European synagogues and has gone numerous refurbishments throughout the centuries, and has a mixture of designs from different eras. The building has sustained damage several times, with the great earthquake in 1667, World War II, and the Croatian War of Independence in the 1990s. The damage has since been repaired as closely as possible to its original design, and the synagogue reopened in 1997. The small museum contains many artifacts from throughout the Jewish community's history in the city.

Why You Should Visit:
To see how Judaism manages to cling on in spite of circumstances.
The interior is quite atmospheric, with its heavy brass lamps and blue ceiling dotted with stars.

Tip:
No photography is allowed.