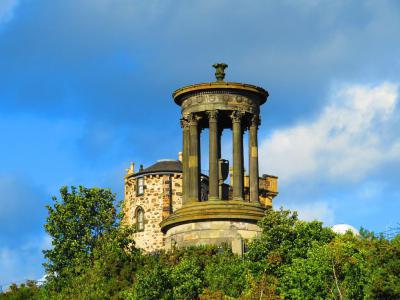 Edinburgh’s Calton Hill is a fascinating place to visit, replete with fine buildings and monuments. Some of these monuments commemorate famous people, others – events, but the Dugald Stewart Monument is a mystery for many to this very day. Just who was this Dugald Stewart and who had a monument raised in his name?

To answer the second part of the question – the monument was commissioned by the Royal Society of Edinburgh in 1831. It was designed by William Henry Playfair, who modelled it on the Choragic Monument of Lysicrate in Athens, and is one of the many Greek Revival structures in the Calton Hill area.

Answer to the first part of the question – Dugald Stewart was a Scottish Enlightenment Philosopher who was responsible for the predominance of Scottish Philosophy in Europe at the early 19th century. He held the chair of Moral Philosophy (Ethics) at the University of Edinburgh, from 1785 to 1810, and although his ideals are considered out of date today, and he is mostly forgotten, in his day he was highly respected for his views.

The Scottish Enlightment Movement, of which Stewart was an important member, believed that man, guided by reason and virtue, could bring about great changes for the better in nature and society.
Image by Kristijrn on Wikimedia under Creative Commons License.