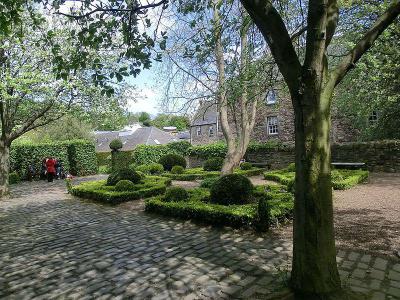 Shopping and sightseeing in Edinburgh’s Royal Mile can be tiring, so if you don’t feel like having lunch in a crowded pub or restaurant, take a pack lunch or pick up a sandwich and take it to Dunbar’s Close Garden near the Canongate Kirkyard.

Dunbar’s Close is one of the 80 narrow lanes left over from medieval times, and the garden there is like stepping back in time. Truly a secret garden, even a lot of locals don’t know it exists, so you will be able to enjoy your lunch in peace.

The garden is surrounded by high ancient brick walls; it is long and rather narrow, with three quarters of an acre laid out in a 17th century design and gravel paths and flowers beds neatly bordered by ting hedges. The beds are filled with herbs, flowers, shrubs and conical-shaped bushes. Mature trees, including fig and sycamore, give a welcome shade over the stone benches.

The garden was created by Sir Patrick Geddes, a biologist, who wanted to make many other gardens like it, but sadly died shortly after Dunbar’s Close Garden was completed. At the beginning of the 1970s the garden was neglected and overgrown, but luckily was then taken over by the Mushroom Trust, a charity that promotes the creation of urban gardens. They commissioned the landscape architect, Seamus Filor, to clean the garden up, and then, in 1977, the Trust gave it to the City of Edinburgh Council, who opened it to the public in 1978.
Image by Lobster1 on Wikimedia under Creative Commons License.