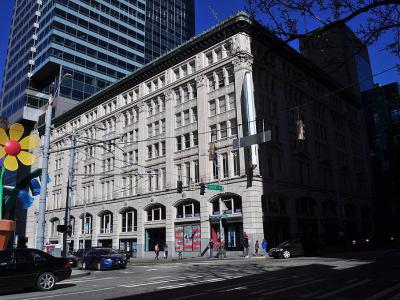 Among the many Seattle buildings that finds a place in the National Register of Historic Places, the Eagles Auditorium is an elaborately terracotta-covered structure that originally opened in 1925 as the primary lodge of the Fraternal Order of Eagles – a local organization that aimed to make human life more meaningful by promoting peace, prosperity, gladness and hope.

Under the official name Kreielsheimer Place, its current configuration has two stages, a cabaret, and 44 residential apartments. The adaptive reuse of the Renaissance Revival-style building (which had been abandoned since the early '80s) as a theater breathed new life into the neighborhood, earning the project team the Urban Land Institute's Award for Excellence.

On his only visit to Seattle, on November 10, 1961, this was one of several places where Martin Luther King, Jr. spoke; however, it has also served as the home of the Unity Church of Truth from in the 1950s and was a major rock concert venue from the mid-1960s until 1970. Among other groups, the Grateful Dead performed here eight times in 1967 and 1968.

Besides its NRHP listing, the Eagles Auditorium is also an officially designated city landmark. Visitors are still welcome to view portions of the building and will be fascinated by the unique architecture and the philanthropic purpose of the fraternity that started it all.
Image Courtesy of Wikimedia and Joe Mabel.