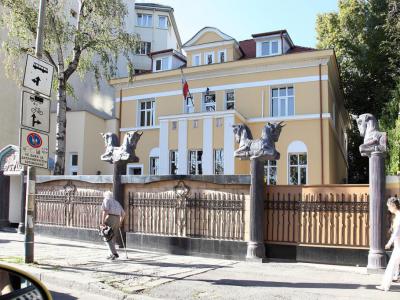 Eagles' Bridge (Bulgarian: Орлов мост, Orlov most) is a bridge over the Perlovska River in the centre of Sofia. It gives the name to the important and busy juncture at which it is located. The name of the bridge itself comes from the four statues of eagles on it, which are, symbolically, its protectors and patrons.

The bridge and juncture are located in the immediate proximity of the Vasil Levski National Stadium, the Monument to the Soviet Army and the park Borisova gradina. For the traffic entering Sofia from the east by Tsarigrad Road, Eagles' Bridge is the first juncture and the point from where the city centre is accessed. The bridge was constructed in 1891 by Czech architect Václav Prošek, his brother Jozef and his cousins Bohdan and Jiří, who also designed and built together the similar but lion-themed Lavov Most in 1889.
Image by Vassia Atanassova - Spiritia on Wikimedia under Creative Commons License.
Sight description based on wikipedia