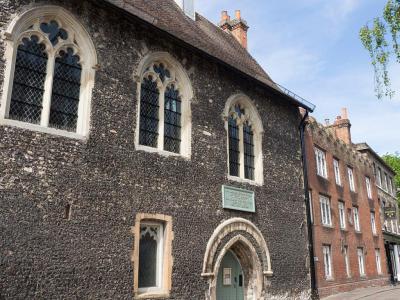 Established to give accommodations to the poor pilgrims visiting the shrine of Saint Thomas Becket, the Hospital of Saint Thomas the Martyr of Eastbridge opened around 1190. The facility is now an almshouse for the elderly.

Don't let the word "hospital" lead you astray. This building is not and was never a medical facility. Instead, the word refers to the hospitality it provided to visiting pilgrims.

The buildings of the Hospital are all original and built in the 12th century. There is a Pilgrim's Chapel, whose ceiling shows woodwork and joinery that have been dated to 1285. The Undercroft originally served as a dormitory.

The Refectory was a large open dining space. A 13th-century fresco of Our Lord in Glory is on the wall. It was discovered and conserved in 1879.

As the name may suggest, the building was built on the King's Bridge near the Westgate. The rooms directly over the River Stour were restored in a massive preservation effort from 2014 to 2019.

The eight individual apartments that make up the present-day almshouse are private and not open to the public. The rest of the buildings, however, are. Eastbridge is one of three adjoining sites--the Eastbridge Hospital, Greyfriars Chapel, and The Franciscan Gardens.
Image Courtesy of Wikimedia and Meganbatterbee.