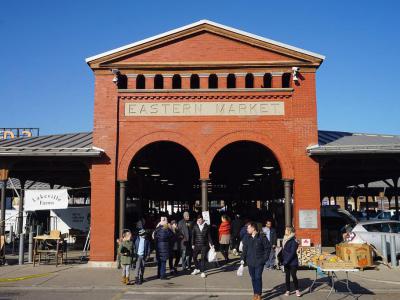 Eastern Market is a historic commercial district in Detroit, Michigan. It is located approximately one mile (1.6 km) northeast of the city's downtown. Eastern Market is the largest historic public market district in the United States, and the Eastern Market farmer's distribution center is the largest open-air flowerbed market in the United States and has more than 150 foods and specialty businesses. Eastern Market is a selling point for a wide variety of produce, meat, spice and other products. It is particularly busy on Saturdays, when farmers tend to bring in their poultry and livestock, along with fresh produce, for sale. Local and internationally recognized art galleries, studios and makerspaces have recently established spaces nearby, including The Red Bull House of Art, OmniCorp Detroit, Inner State Gallery, Riopelle and Project.
Image by Etx313 on Wikimedia under Creative Commons License.