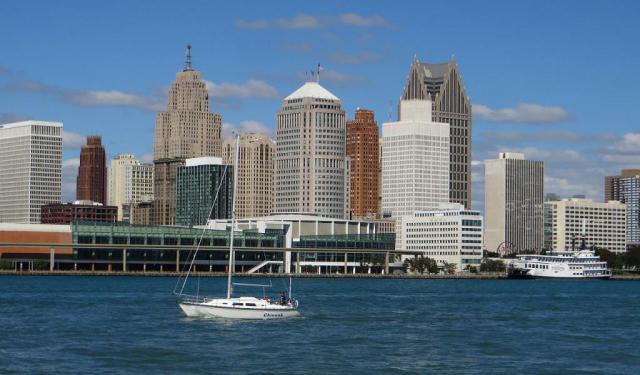 Detroit is Michigan's largest city, Wyne County's seat, and the biggest city on the United States border with Canada. Its location on the Detroit River, proximity to the Great Lakes, and proximity to Canada have helped secure this city as a major trading area over its long history. The city is also famous as the home of Motown.

European settlement in the 17th century began with the arrival of French traders and missionaries who traded with and sought to convert local Huron, Iroquois, Potawatomi, and Odawa. Detroit's formal incorporation took place in 1815, and the city was a stop of the Underground Railroad, as well as a key recruiting spot during the Civil War.

Detroit was an early center for the automotive industry and played a leading role in manufacturing for the defense industry in the World War II era. The city has seen changes to its economy over the years and greater diversification. Several landmarks in the city are important to the city's history and culture, including Motown-related attractions.

Noteworthy buildings include the collection of seven skyscrapers at The Renaissance Center and The Guardian Building. Areas, where you can take full advantage of local life, include Hart Plaza, Campus Martius Park, and Greektown. Artistic works that you won't want to miss include the Joe Louis Memorial and Spirit of Detroit.

Take this self-guided walking tour to see all the most prominent attractions in downtown Detroit.
Image Courtesy of Wikimedia and Ken Lund.
How it works: Download the app "GPSmyCity: Walks in 1K+ Cities" from iTunes App Store or Google Play to your mobile phone or tablet. The app turns your mobile device into a personal tour guide and its built-in GPS navigation functions guide you from one tour stop to next. The app works offline, so no data plan is needed when traveling abroad.

The Renaissance Center in Detroit consists of seven connected skyscrapers in the downtown area. This grouping's tallest building, Detroit Marriott at the Renaissance Center, is Michigan's tallest building. A central feature of this building is a circular glass walkway that connects to walkways leading into the other buildings, some of which feature fascinating attractions.

One of the highlights of the Marriott building is an atrium with eight stories. Terraces and concrete balconies are a significant part of this area. One of the hotel's upper floors has a restaurant with an observation deck allowing views up to 30 miles away.

A five-story retail area hosts GM World, an exhibition devoted to vehicles from General Motors. Another highlight is Asian Village in the GM Center. This collection of restaurants offers East and Southeast Asian cuisine, featuring the types of dishes that are street food cart favorites in that part of Asia.

Hart Plaza is a 14-acre plaza in Detroit that easily accommodates 40,000 people. This popular gathering place has been an essential part of the city's landscape since its opening in 1975. The plaza is named after U.S. Senator Philip Hart, who was a Detroit resident and one of the city's key figures.

The plaza has a location that is easy to find at the intersection of Jefferson and Woodward Avenues. One of the highlights is the Horace E. Dodge and Son Memorial Fountain, which stands out for its unique contemporary style. Isamu Noguchi designed the fountain in 1978.

Hart Plaza has enjoyed status as a favorite place for summer festivals, perfect for its open spaces. Concerts are also a popular type of event, representing many different musical styles. You can also catch other special events, ranging from artistic events to ethnic and culinary festivals. The plaza is an excellent place to sit back and enjoy people-watching.

Image Courtesy of Wikimedia and U.S. Army Corps of Engineers.
3

The Joe Louis Memorial is one of Detroit's most iconic sites. With its nickname "The Fist," this sculpture has a prominent place in Hart Plaza, making it one of the city's most popular attractions. Robert Graham designed to sculpture, while Rolf Kriken was the bronze artist responsible for the pouring.

This sculpture features an arm featuring 24 feet long. A 24-foot high pyramid-style framework supports a replica of Joe Louis' fist. The fist is an effective symbol highlighting Louis' history as a boxer, as well as a powerful symbol against racism.

The artist has described the fist like a battering ram to demonstrate its power. Another interesting feature is how the fist points towards Canada, showing that the American fight for democracy has crossed borders. This sculpture is a powerful symbol that is worthy of a photo opportunity.
Image Courtesy of Flickr and cletch.
4

The Spirit of Detroit is one of Detroit's most popular monuments. This Marshall Fredericks-created bronze statue is at the Coleman A. Young Municipal Center. One of the things that makes this statue stand out is its status as the biggest bronze statue cast since the Renaissance. The figure stands 26 feet high.

Two of the highlights of the sculpture include the items held in its hands. The right hand contains figures of a family, symbolizing human interconnectedness. A sphere in the right hand features rays and is of gilt bronze, representing God. An inscription from 2 Corinthians 3:17 is on the wall behind the sculpture.

This monument's importance as a civic symbol is seen with the seals for the City of Detroit and Wayne County; both featured in the wall. One of the highlights is a plaque that describes the symbolism demonstrated through the various parts of the memorial. The importance of faith and family for the community is aptly highlighted.
Image Courtesy of Flickr and Al R.
5

5) The Guardian Building (must see)

The Guardian Building is one of Detroit's most famous skyscrapers, with a location at 500 Griswold Street, in the city's Financial District. This building was completed in 1929 and demonstrates the Art Deco style that was popular at that time. A highlight that makes the building stand out, in addition to its architecture, is the size of the American flag at the top of the building.

Most of the building spans 36 stories, with one of the spires featuring 40 stories. In addition to brickwork, the building features terra cotta, limestone, and tile. Sculptures make up part of the building's exterior, demonstrating the importance of commerce to the city.

The main entrance features a semi-circular dome that is colorful. Inside the building, the lower lobby has many features similar to the inside of a cathedral, including a ceiling with colorful tile designs. The elevator lobby has colorful lamps that are in keeping with the Art Deco design.
Image Courtesy of Wikimedia and Coreyfein01.
6

One of the highlights is the Woodward Fountain, which has a nearby seating area. The landscaping in this park is among some of Detroit's most beautiful, and there are large garden areas throughout the park. Some of the additional attractions include the Point of Origin 1806 monument and The Michigan Soldiers and Sailors Monument.

This park is a place where something interesting is always going on. Free events and programs for all ages are regular features here. Some of the free events include classes. Regardless of whether you're hoping to catch a concert or just relaxing, you won't want to pass up this park.
Image Courtesy of Wikimedia and Michael Barera.
7

Greektown is one of Detroit's most popular commercial and entertainment districts. During the early 20th century, this district was where most of the Greek immigrants settled. Even when the Greek community started relocating to other areas in the 1920s, the neighborhood still retained many of the restaurants and coffeehouses that made it stand out.

Second Baptist Church and St. Mary's Roman Catholic Church are two of the churches with the greatest significance. Another landmark historical building is the Atheneum Suite Hotel. This neighborhood has had a place on the National Register of Historic Places since 1982.

The Greektown Casino is one of the highlights of this area. The casino's architectural highlights include elements similar to the Parthenon. Monroe Street, one of the main streets in this area, plays festive Greek music all day, adding to the atmosphere. There are seven Greek-style restaurants, each serving unique types of cuisine.
Image Courtesy of Flickr and xiquinhosilva.

Detroit is known for having many monuments and statues to great personalities that are scattered across the city.

Did you know that the monument commemorating the “freedom fighter for two continents”, Thaddeus Kosciuszko, is actually replica of the monument standing by Wawel castle in Krakow, Poland? Another featured military figure, Gen. Alexander Macomb, was a hero in the War of 1812 and...  view more

Midtown Detroit is a mixed-use area consisting of a business district, cultural center, a major research university, and several residential neighborhoods, located along the east and west side of Woodward Avenue. Most of all, it is a cultural epicenter with numerous activities huddled in one place, especially when it comes to museums, restaurants, and bars.

Start your journey with the Wayne...  view more