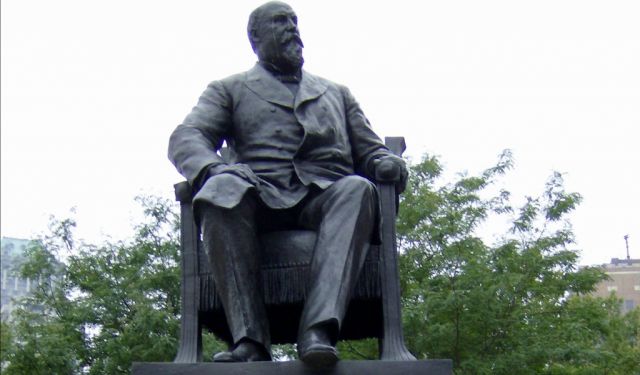 Detroit is known for having many monuments and statues to great personalities that are scattered across the city.

Did you know that the monument commemorating the “freedom fighter for two continents”, Thaddeus Kosciuszko, is actually replica of the monument standing by Wawel castle in Krakow, Poland? Another featured military figure, Gen. Alexander Macomb, was a hero in the War of 1812 and longtime 19th century military leader in Detroit.

Flanked by bows of ships on either side, the monument to Christopher Columbus was dedicated in 1910, and was a gift from the readers of an Italian newspaper in honor of the 400th anniversary of Columbus' death.

Contrasting these male figures is a 11-foot bronze sculpture crafted by local artist, Giacomo Manzu, which depicts his wife as a nude ballet dancer, standing on point with her hands sensually uncoiling her hair above her head.

Similarly, the Russell A. Alger Memorial Fountain in Grand Circus Park features a bronze statue of a woman about 7 feet tall wearing a headdress and a flowing gown and carrying a sword and a shield that bears the state seal. She is the bronze personification of the state of Michigan!

Take our self-guided tour to explore these and other unique monuments and statues in Detroit.
Image Courtesy of Wikimedia and Mikerussell.
How it works: Download the app "GPSmyCity: Walks in 1K+ Cities" from iTunes App Store or Google Play to your mobile phone or tablet. The app turns your mobile device into a personal tour guide and its built-in GPS navigation functions guide you from one tour stop to next. The app works offline, so no data plan is needed when traveling abroad.

The statue of General Thaddeus Kosciuszko memorializes an American hero of Polish origin. Thaddeus Kosciuszko was a soldier and a civil rights advocate. He was in George Washington's army and participated in the Revolutionary War where he became a general. He served in France as Ambassador of the United States. He sold his properties in the U.S. and used this money to free and educate slaves. This bronze statue of the general on a horse was a gift from Poland. It was erected in 1911 and is a copy of a monument in Krakow.
Image Courtesy of Flickr and jodelli.
2

The statue of General Alexander Macomb can be found on a busy intersection in Detroit. Alexander Macomb grew up in a rich and prominent family. Macomb had a great military career. He behaved bravely at the battle of Plattsburgh, New York, in the War of 1812. The statue, built in 1908, is designed in the Classic Revival style and is made of bronze. It is believed that the statue was made from melted cannons left over from the war. The statue depicts Macomb as a proud officer. His figure rests on a granite pedestal.
Image Courtesy of Wikimedia and Mike Russell.
3

Passo di Danza translates to 'Step of the Dance.' This sculpture depicts a naked female ballet dancer. Italian sculptor Giacomo Manzu crafted the sculpture in the image of his wife. The dancer stands poised on her toes, ready to begin the first steps of her dance. Her elegant hands rest on her head. The statue is made from bronze and shines in the sunlight. It is located at the American Natural Gas Company Building.
Image Courtesy of Wikimedia and Mikerussell.
4

The Christopher Columbus Monument was made possible by generous donors. The monument is a bust of Columbus that sits on a pedestal with two prows of ships as reminders of his famous discovery of America. This statue was erected in 1910 on the 400th anniversary of his death. The monument was made in Italy and was shipped to Detroit.
Image Courtesy of Flickr and Anthony Lockhart.
5

"Hand of God" is a sculpture-monument dedicated to Frank Murphy and is located at the Frank Murphy Hall of Justice. Murphy was a governor, a judge, U.S. Attorney General and mayor of Detroit. He contributed a great deal to the development of Michigan. The statue is shaped in the form of a giant hand. Resting on the fingers is a naked figure leaning backwards. The sculpture is made from bronze and is set on black granite.
Image Courtesy of Wikimedia and Holger.Ellgaard.
6

The Russell A. Alger Memorial is located in Grand Circus Park. Alger held several public jobs, serving as a general, a United States senator, governor of Michigan, and Secretary of War. His memorial is strikingly beautiful. It was created by one of the most outstanding sculptors of the region - Daniel Chester French. The memorial consists of a pedestal topped by a statue of a female figure representing the state of Michigan. On the head of the statue is a laurel crown. She is greeting the people of Detroit with one hand and holding a sword and shield in the other. The memorial was established in 1921.
Image Courtesy of Flickr and Ken Lund.
7

The statues of Mayors Hazen S. Pingree and William H. Maybury commemorate these civic leaders of Detroit. Their statues are located in Grand Circus Park near one another, but they were far from friends – instead, they were mortal enemies who "hated, detested, loathed each other," as the Free Press wrote in 1941.

Hazen S. Pingree served as Detroit mayor from 1890 to 1897, leaving office only after being elected governor of Michigan. Old Ping, as he was known, was named one of the 10 best mayors in U.S. history in a poll of scholars, who noted that his "role as an advanced social reformer was unmatched by any big-city mayor in the last half of the 19th century." His tough-love form of social reform, historians note, was the forerunner for the reforms of the Progressive Era. Besides his social reforms, the Republican mayor is best known for turning vacant land into vegetable patches to feed the city's needy during the economic downturn of the 1890s.

The mustachioed mayor kicking back next to him, William Cotter Maybury had previously been Detroit's city attorney and a congressman. He "won local, if not national, renown as a baby-kisser. He just cooed his way into office telling mothers how beautiful their babies were," the Free Press wrote in 1941. "For a while no mother thought her child would have a chance in life unless he had been kissed by dear Mr. Maybury – that nice, nice man." He did not make waves with Big Business and didn't continue Pingree's all-out fight for municipally owned utilities. He may have been timid, but Detroiters approved of Maybury's laid-back, relaxed style. Industry leaders were particular supporters of his pro-business philosophy toward government, and Maybury is to thank in part for the vast number of factories that began to dot the city under his watch.

Midtown Detroit is a mixed-use area consisting of a business district, cultural center, a major research university, and several residential neighborhoods, located along the east and west side of Woodward Avenue. Most of all, it is a cultural epicenter with numerous activities huddled in one place, especially when it comes to museums, restaurants, and bars.

Start your journey with the Wayne...  view more

Detroit is Michigan's largest city, Wyne County's seat, and the biggest city on the United States border with Canada. Its location on the Detroit River, proximity to the Great Lakes, and proximity to Canada have helped secure this city as a major trading area over its long history. The city is also famous as the home of Motown.

European settlement in the 17th century began with the...  view more