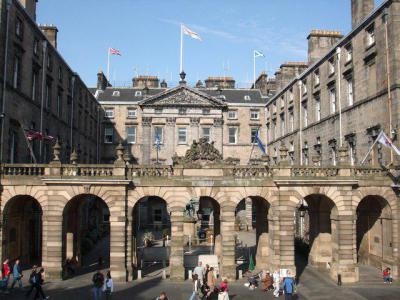 Edinburgh City Chambers is the meeting place of the City of Edinburgh Council and its predecessors.

The current building, Category A-listed, was originally designed as the Royal Exchange, and was architected by John Adam, with detail alterations by John Fergus. The construction works absorbed many small streets, commonly known in Edinburgh as "closes", that ran north to south across the breadth of the site. The Royal Exchange edifice sat partially on top of the truncated buildings on the closes that were subsequently blocked off. These now underground closes were still accessible but were closed for public access for many years until reopened as 'The Real Mary King's Close'.

The main building is set back from the High Street behind a quadrangle fronted by a groin-vaulted open arcade screen facing the street. There is a prominent bronze statue of Alexander Taming Bucephalus, by John Steell, in the quadrangle.

***Harry Potter Tour***
Inside the Chambers there is a Hollywood-style plaque installed as tribute to the winners of the prestigious Edinburgh Award which is presented to the outstanding citizens of the city.

In 2008 J.K. Rowling received the award, following which her hands were cast in bronze and placed in the chambers’ courtyard.
Image by Ronnie Leask on Wikimedia under Creative Commons License.
Sight description based on wikipedia