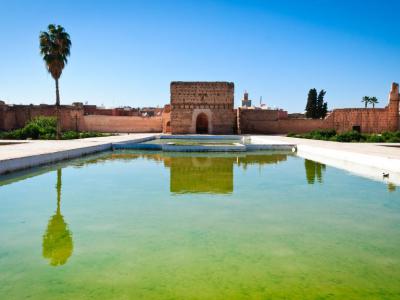 All that remains of the once stately El Badi Palace are the extensive ruins, so when you visit it and walk among the remains, spare a thought for the ghosts of past splendors.

Fresh from his victory over the Portuguese in the Battle of the Three Kings in 1572, the Sultan Ahmed el-Massour of the Saadian Dynasty ordered a palace to be built in celebration. He wanted it to be the most important building in Marrakech and named it “Incomparable”. Sadly, the sultan died before its completion in 1603.

Today it is hard to imagine just how magnificent this palace really was with its 360 rooms around the interior courtyard that measured 135 meters by 110 meters and was full of fountains and an enormous pond. However bare the current form, its sheer size is still impressive.

Most of it was paid for by the punishing reparation debt imposed on Portugal after the battle; the mosaics came from Italy, exchanged against sugar in lieu of money, and the gold fittings came from the gold mines of Sudan. Onyx, ivory, cedar wood, and semi-precious stones completed the original interior.

In 1683, after the Saadian Dynasty fell to the Alaouites, the new Sultan Moulay Ismail removed anything that had any value from the palace to decorate his new palace in another town, and El Badi slowly fell into ruin.

An internal staircase (look for a sign on the wall) on the northeast side leads to a small terrace overlooking the complex, giving you an idea of its size and organization. A small museum contains the restored 12th-century intricately carved 'minbar' (Imam's pulpit) from the nearby Koutoubia Mosque.

Why You Should Visit:
Huge and beautiful palace to wander around with lots to see, including a network of underground passageways, tile floors in rooms open to the sky, and a well-preserved minbar.

Tip:
Unfortunately (for English speakers), the majority of posted information about the complex is in Arabic and French; however, the short video in English gives a good overview of the palace's history, construction, layout and original appearance. Hiring an Engish-speaking guide will greatly improve your appreciation of El Badi.
As you wander around the complex, look for stork nests on some of the higher walls.
Inside the palatial complex there is little shade, so a visit early in the morning will be both cooler and sparing the need to stand a long line for tickets.
Bring water and snacks, as no refreshments are available on site.