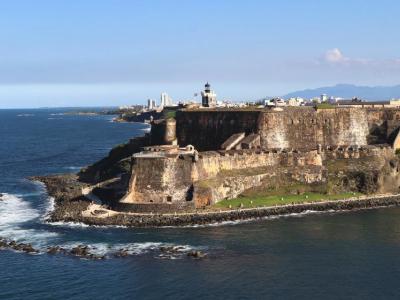 Fort San Felipe del Morro, aka El Morro, is a 16th century citadel on the northwestern-most point of San Juan, named in honor of King Philip II of Spain. It was the second military installation, after La Fortaleza, built on the islet of what is now Old San Juan and Puerta de Tierra.

The construction commenced in 1539, authorized by King Charles V, and was finished in 1790, during which period El Morro had gone from a promontory mounted with a cannon to a six-level fortress designed to guard the entrance to San Juan bay from seaborne invaders. Many more structures were added to the complex over the next 400 years; the outer walls, originally built 6 feet (1.8 m) thick, were augmented to 18 feet (5.5 m) by the end of the 18th century.

Thanks to El Morro, the Spanish were able to defend Puerto Rico from invasions by the British and Dutch, as well as pirates. In 1898, following the Spanish-American War, the island changed hands from Spain to the United States. El Morro was actively used as a military installation during the First and Second World Wars.

In 1961, the US Army retired El Morro, passing it on to the National Park Service to establish as a museum. In 1983, El Morro and the walled-city of Old San Juan were declared UNESCO World Heritage Sites.

Why You Should Visit:
To appreciate the importance of Puerto Rico as a strategic entry point to the Americas and the evolution of El Morro over the last five centuries.

Tips:
The receipt also allows to visit the Castillo San Cristóbal without having to pay a separate entrance fee (and vice versa).

Operating Hours:
Seven days a week from 9:00 am to 6:00 pm.
Image by Prayitno on Flickr under Creative Commons License.
Sight description based on wikipedia