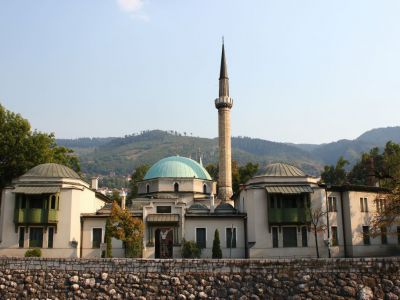 The Emperor's Mosque is an important landmark in Sarajevo, being the first mosque to be built (1457) after the Ottoman conquest of Bosnia. It is the largest single-subdome mosque in Bosnia and Herzegovina, built in the classical Ottoman style of the era.

The original mosque was built in the mid-fifteenth century and has a long and fascinating history. Damaged and totally destroyed at the end of that century, it was rebuilt in 1565 and dedicated this time to Suleyman the Lawgiver, one of the most splendid and renowned Sultans of the Ottoman Empire. The first mosque was made of wood and significantly smaller than existing building that was built in 1565. Side rooms were added in 1800 and connected to the central prayer area in 1848. Between 1980 and 1983 the painted decorations in the interior of the mosque were conserved and restored. The burial ground (graveyard) beside the Emperor's Mosque contains the graves of viziers, mullahs, muftis, sheikhs, the employees in the Emperor's Mosque, along with other prominent figures living in Sarajevo. The mosque was damaged during World War II but mostly in the wars during the 1990s, and renovation work is pending.

The first settlements in Sarajevo were built around the mosque with the residence of the Sultan's representatives then being built next to the mosque. Isa-bey also built a hammam (public bath) and a bridge that led directly to the mosque. This bridge was disassembled during the Austro-Hungarian government and rebuilt just a few meters upstream where it still exists today.
Image Courtesy of Wikimedia and Julian Nitzsche.
Sight description based on Wikipedia.