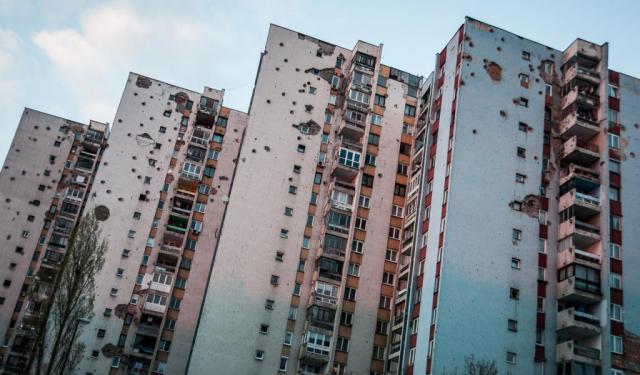 The Bosnian War began when Bosnia and Herzegovina declared independence from Yugoslavia. The city was blockaded by the Serbs and bombarded by bombs, tanks, and artillery. Snipers lay in wait in a region that was dubbed Sniper Alley.

Nearly every building in Sarajevo suffered at least some damage by the end of the siege. Approximately 35,000 buildings were completely destroyed. Among these was the National Library, which was fully burned to the ground. The National Library was rebuilt and now functions as the Sarajevo City Hall.

The siege finally came to an end on February 29, 1996. Reminders of this brutal piece of Sarajevo history can be found throughout the city in the Sarajevo Roses, impressions left by bombs that were later filled with red resin to symbolize the loss of life and property during the war.
Image Courtesy of Flickr and Michał Huniewicz.
How it works: Download the app "GPSmyCity: Walks in 1K+ Cities" from iTunes App Store or Google Play to your mobile phone or tablet. The app turns your mobile device into a personal tour guide and its built-in GPS navigation functions guide you from one tour stop to next. The app works offline, so no data plan is needed when traveling abroad.

Sniper Alley is an informal name for a portion of the main boulevard in Sarajevo. The streets of Zmaja od Bosne (Dragon of Bosnia) and Mesa Selimovic Boulevard were once highly dangerous for civilians. A large number of high-rise buildings provided excellent perches for the snipers that populated the city.

Sniper Alley connected the industrial parts of the city to the Old Town's historical and cultural sites, where many citizens lived. Locals needed to travel these streets despite the danger posed by the numerous snipers. The area had a large number of hand-painted signs warning of the presence of snipers to encourage citizens to find new walking routes.

It is estimated that about 225 people were killed by snipers. More than 1,000 others were wounded by sniper bullets.

Today, the region that was called Sniper Alley just a few decades ago is now home to the Sarajevo University campus, several government offices, the Botanic Gardens, and major museums.

Image Courtesy of Wikimedia and Paalso.
2

2) Memorial to the Murdered Children of Besieged Sarajevo

The Memorial to the Murdered Children of Besieged Sarajevo is a monument that honors the memory of the children killed during the Siege of Sarajevo. The siege took place from 1992 through 1995. During that period, 1,621 children were killed.

The Memorial is located in Veliki Park (Great Park), one of the central places of Sarajevo. It was erected in 2009, on the initiative of the “Association of the Parents of the Murdered Children in the Besieged Sarajevo 1992–1995.” The monument consists of a glass sculpture placed on a bronze ring. The ring is made from shell casings and ammunition fired in Sarajevo. The glass sculpture features two cylindrical forms leaning toward each other. These represent a mother protecting her child.

The monument includes seven pedestals behind the plateau. They are engraved with the first and last names of each child, the names of their fathers, their birth years, and the year the child was killed. Currently, there are only 521 names etched into the pedestals.

The memorial was designed by Bosnian sculptor Mensud Kecho.
Image Courtesy of Flickr and Jennifer Boyer.
3

Sarajevo Rose is a memorial dedicated to the Siege of Sarajevo. Though there are about 200 of these roses located throughout the city, the primary rose is located in the walkway at Marsala Tita (Marshal Tito) next to Veliki Park (Great Park). It signifies the location of the first Markale massacre.

The memorials found throughout the city use impressions left behind in the concrete and asphalt by mortar shell explosions. The rounds created unique patterns that resemble floral arrangements. They were filled with red resin. Each marks a location where at least three people were killed.

Some of the memorials are official roses that were marked by the Ministry of Veterans Affairs of Canton Sarajevo. Others were marked by citizens of the city without official permission.

Many of the memorials have been damaged over the years due to regular pedestrian and vehicular wear and tear. Various types of protection have been attempted over the years, but they have proven to be impractical due to the locations of each rose.
Image Courtesy of Flickr and amanderson2.
4

4) Museum of Crimes Against Humanity and Genocide

The Museum of Crimes Against Humanity and Genocide is a museum that showcases war crimes committed during the war in Bosnia that lasted from 1992 to 1995. The museum opened in 2016 as an initiative to sustain the memory of all the victims of the war. The founders of the museum themselves are victims who survived the war.

The museum began as a collection of photos, but many artifacts have been added to the museum since it was founded. Some of these artifacts include personal items of the victims, instruments of torture, a mock-up minefield, a reconstructed torture cell, and a replica of a mass grave.

The museum is divided into themes. Some of these include concentration camps in Bosnia and Herzegovina, the mass killings at Srebrenica, torture, and children as victims of war.

Visitors to the museum can see works of art, including the sculpture of a man, made from bread. The sculpture symbolizes those individuals killed while waiting in line for food. Three films provide educational material to museum patrons. They cover sexual violence, the Siege of Sarajevo, and first-hand accounts of war crimes.

The museum is open daily from 9 AM to 9 PM.
Image Courtesy of Wikimedia and Mikhail Evstafiev.
5

War Childhood Museum is the world's only museum exclusively focused on the experience of childhood affected by war. The museum, founded in 2017 by Jasminko Halilovic, a Bosnian author and editor, shows the history of the war in Bosnia through the eyes of children. It uses personal objects and videos to showcase the accounts of children in war.

Halilovic, a war child himself, started collecting first-hand accounts from other war children in 2010. With over 1,000 personal accounts, Halilovic started seeking artifacts from these former war children. With over 3,000 objects and numerous oral testimonies, the War Childhood Museum opened.

Collections in the museum include diaries, toys, clothing, and photographs. Patrons can also listen to testimonies from war children and read some of the interviews conducted by Halilovic.

The War Childhood Museum was awarded the 2018 Council of Europe Museum Prize as part of the 2018 European Museum of the Year Award.

The museum is open daily from 11 AM to 7 PM. Admission is free for children under five. The museum also offers free admission from 5 PM to 7 PM on the last Thursday of each month.
Image Courtesy of Wikimedia and Anida Krečo.
6

Martyrs' Memorial Cemetery Kovaci is the main cemetery for those who were killed in the Yugoslav Wars from 1991 to 2001. The cemetery was primarily used as the final resting place for the soldiers of the Army of Bosnia and Herzegovina who were killed during the conflict.

During the war, the city was plagued by snipers and grenade fire that averaged more than 300 grenades per day. Nearly 12,000 residents were killed during the Yugoslav wars, including 1,500 children. Many of the victims of this violence are buried in the Martyrs' Memorial Cemetery Kovaci.

In addition to civilian victims, the former Yugoslav president Alija Izetbegovic is buried in the Kovaci cemetery. The cemetery is sometimes referred to as the Shahid Cemetery due to its historic Islamic roots. Some of the oldest tombs date to the 15th century.

The cemetery is open 24 hours. The lack of proper lighting makes the cemetery best viewed during daylight.
Image Courtesy of Flickr and Jennifer Boyer.