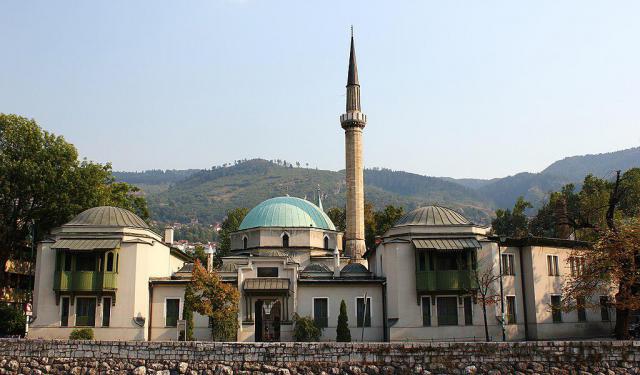 Sarajevo is a city founded by the Ottoman Empire upon conquering the region, 1461 is most often referred to as the founding year. Today, there are a number of landmarks built by the first Ottoman governor of Bosnia that endured over the centuries. Take this self-guided walking tour to see the most impressive Ottoman landmarks in the city of Sarajevo.
Image Courtesy of Wikimedia and Julian Nyča.
How it works: Download the app "GPSmyCity: Walks in 1K+ Cities" from iTunes App Store or Google Play to your mobile phone or tablet. The app turns your mobile device into a personal tour guide and its built-in GPS navigation functions guide you from one tour stop to next. The app works offline, so no data plan is needed when traveling abroad.

The Old Bazaar (Bascarsija) is the historical and cultural center of Sarajevo. It was built by Isa-Bey Ishakovic, the founder of Sarajevo, at the time the city was founded in the 15th century.

The first construction of the Old Bazaar was in 1462. An inn and several shops were built in the area. Mosques were also added, including the Gazi Husrev-beg Mosque, which was constructed in 1530. In addition to the Mosques, the Old Orthodox Church was established around 1539, and the Old Synagogue was built in 1587.

There are many important, historical buildings and structures in and around the Old Bazaar. Among these are the Gazi Husrev-beg Mosque and the Sebilj Fountain.

Sebilj Fountain is a symbol of Sarajevo. The Ottoman-style wooden fountain built by Mehmed Pasha Kukavica in 1753, was relocated by Austrian architect Alexander Wittek in 1891. Legend states that anyone who drinks from the Sebilj Fountain will return to Sarajevo.

The fountain is so famous that it has inspired numerous replicas around the world. There are copies of the Sebilj Fountain in Belgrade, Serbia; St. Louis, Missouri; Bursa, Turkey; and Rozaje, Montenegro.

Built in 1526 by Muslihudin hajji Mustafa Cekrekcija, Cekrekcinica Mosque is the only single-dome mosque in the region that has survived until today. The original deed of endowment of Cekrekcija is the oldest deed in Sarajevo. According to it, Cekrekcija also endowed 45 stores in Carsija.

The dome of the mosque is the work of architect Hajrudin. It is placed above the prayer area. The interior is beautifully decorated with geometric shapes and plant illustrations.
Image Courtesy of Wikimedia and Milan Suvajac.
3

Morića Han is a han (that is, a roadside inn) originally built in 1551 in Sarajevo. After a fire in 1697 it was reconstructed in its current form. Morića Han is one of the buildings which were financed by and belonged to Gazi Husrev-Beg's endowment (Vakuf). It is the only surviving han in Sarajevo. It is located in Baščaršija, Sarači street, in Stari Grad.

Morića Han is considered a true caravanserai because, when operational, it could accommodate about 300 passengers and 70 horses. Evliya Çelebi, an Ottoman traveler, wrote about his visit to Sarajevo in 1659 and described Morića Han as Hadži-Bešir's han, because Hadži-Bešir was landlord of the han then. The modern name probably comes from the surname of the han's tenants at the beginning of the 19th century, Mustafa-aga Morić and his son Ibrahim-aga Morić. However, some sources connect the name of this han with the Morić brothers who participated in rebellions against the Ottoman Empire from 1747 to 1757. The citizens of Sarajevo gathered in Morića Han on July 29, 1878, established Narodni Odbor (English: Peoples Council) and protested against the occupation of Bosnia and Herzegovina by Austria-Hungary.

The han has survived several fires, most recently in December 1957. It was reconstructed from 1971 to 1974 and decorated with Persian calligraphy inscriptions from poems written by Omar Khayyám. Stari Grad returned ownership of Morića Han to Gazi Husrev-Beg's endowment in 1998. Management of the endowment rents the han for business purposes that match the historical context, including a national restaurant, a Persian carpet shop, and religious societies.
Image Courtesy of Wikimedia and Whitepixels.
Sight description based on Wikipedia.
4

At the Gazi Husrev-beg madrasa classes were attended and the teaching methods and schedules were traditional, modeled on other madrasas of large cities throughout the Empire.

In his will (waqf name), Gazi Husrev-beg appointed a professor (muderis) and his madrasa to be a learned man (alim), who would teach the interpretation of the Qur'an (tefsir), oral tradition (hadit), legal philosophy and its topics, such as sharia law (ahkam) and Islamic Islamic jurisprudence (fiqh), sharia law institutions. (usul), philosophy and its topics, such as poetics and rhetoric concerning semantic syntax, and allegorical and non-allegorical significations, linguistic allusion and linguistic signalling (al-Maānī wa 'l-Bayān), metaphysical dogmatics (kalam), "and of other sciences, those that require habit and time".

The education lasted between 12 and 16 years, the students were not divided into classes but into rings (circles, groups), and at the end of school they received a diploma (ijazah).

Today, the Gazi Husrev-beg Madrasa acts as a high school and college. The training lasts for four years. Classes are conducted in Bosnian according to the Curriculum adopted by the Islamic Community in Bosnia and Herzegovina (Riyaset), and approved by the Ministry of Education and Science of Sarajevo Canton. Students who have completed this high school can continue their education at any faculty in Bosnia and Herzegovina and at many faculties abroad.

The madrasa is a boarding school and all regular students live there. This, in addition to regular classes, allows them a variety of extracurricular activities through different sections, clubs and circles. The choir section, which has a dozen recorded audio and video features with Islamic religious songs glorifying Allah (ilahija) and songs about famous people from the Islamic milieu (kasida).
Image Courtesy of Wikimedia and Mattan.
Sight description based on Wikipedia.
5

Gazi Husrev-beg Mosque is a Sunni Islam mosque in the historic center of Sarajevo. This 16th-century mosque was designed by architect Acem Esir Ali using Early Period, Classical Ottoman architecture. Construction was completed in 1530. Along with the mosque, the plans included Islamic primary and secondary schools, a public bath, and a marketplace.

The mosque was retrofitted with electricity and indoor lighting in 1898 under the Austro-Hungarian Empire. It was the first mosque in the world to have these modern conveniences.

The mosque was targeted by Serbians during the Siege of Sarajevo. It suffered major destruction, but reconstruction efforts began almost immediately at the end of the siege. The new interior was designed by contemporary Bosnian calligrapher Hazim Numanagic.

Gazi Husrev-beg Mosque is considered the largest historical mosque in the country. It is also one of the city's most popular tourist attractions. Visitors are welcome to tour the mosque and its museum daily from 9 AM to 7 PM.
Image Courtesy of Flickr and Fred Romero.
6

Built in the 17th century, Sarajevo Sahat Kula (clock tower) is one of the most beautiful and highest towers in Bosnia and Herzegovina. The tower was seriously damaged by fire in 1697, but was restored in 1762. During the Austro-Hungarian occupation, it was decided to increase its height and to replace the old Turkish clock. Two Sarajevo merchants brought the new clock from London in 1874.

Sarajevo Sahat Kula was erected by Gazi Husrev-bey, who was one of the most important figures in Ottoman Bosnia. Because the clock shows the lunar hour, it should always be adjusted. It is considered to be the only public lunar clock in the world.
Image Courtesy of Wikimedia and Dans.
7

Gazi Husrev-beg's bezistan is one of the preserved bezistan (covered market) in Sarajevo, Bosnia and Herzegovina, from the Ottoman period in the history of the country. Built in 1555 in Baščaršija, bezistan still serves its purpose - trade.

Bezistan is part of the endowment of Gazi Husrev-beg. It was built in 1555 in the immediate vicinity of the Kuršumli Madrasa, the Bey's Mosque and the Clock Tower, with which it is connected by an eastern entrance. It is rectangular in shape with entrances, which border the 109 m long street in which small shops are located. Gazi Husrev-beg Street (also called Zlatarska) runs parallel along the bezistan. Dubrovnik craftsmen took part in the construction. Due to the slightly lower temperature achieved by building below the level of the surrounding streets, the original purpose of the bezistan was to trade in groceries. This still makes shopping on warm, summer days enjoyable. With its appearance, Gazi Husrev-beg's bezistan is reminiscent of the Kapali Bazaar and bezistan in Istanbul or souk in the cities to the east.

Gazi Husrev-beg's bezistan has been declared a national monument of Bosnia and Herzegovina.
In addition to the bezistan, there was also the Tashlihan, which was built at the same time as the bezistan, also as the waqf of Gazi Husrev-beg. It suffered great damage in the fire of 1879, and the last walls of the Taslihan disappeared in 1912.
Image Courtesy of Wikimedia and Christian Bickel.
Sight description based on Wikipedia.
8

The Emperor's Mosque is an important landmark in Sarajevo, being the first mosque to be built (1457) after the Ottoman conquest of Bosnia. It is the largest single-subdome mosque in Bosnia and Herzegovina, built in the classical Ottoman style of the era.

The original mosque was built in the mid-fifteenth century and has a long and fascinating history. Damaged and totally destroyed at the end of that century, it was rebuilt in 1565 and dedicated this time to Suleyman the Lawgiver, one of the most splendid and renowned Sultans of the Ottoman Empire. The first mosque was made of wood and significantly smaller than existing building that was built in 1565. Side rooms were added in 1800 and connected to the central prayer area in 1848. Between 1980 and 1983 the painted decorations in the interior of the mosque were conserved and restored. The burial ground (graveyard) beside the Emperor's Mosque contains the graves of viziers, mullahs, muftis, sheikhs, the employees in the Emperor's Mosque, along with other prominent figures living in Sarajevo. The mosque was damaged during World War II but mostly in the wars during the 1990s, and renovation work is pending.

The first settlements in Sarajevo were built around the mosque with the residence of the Sultan's representatives then being built next to the mosque. Isa-bey also built a hammam (public bath) and a bridge that led directly to the mosque. This bridge was disassembled during the Austro-Hungarian government and rebuilt just a few meters upstream where it still exists today.
Image Courtesy of Wikimedia and Julian Nitzsche.
Sight description based on Wikipedia.