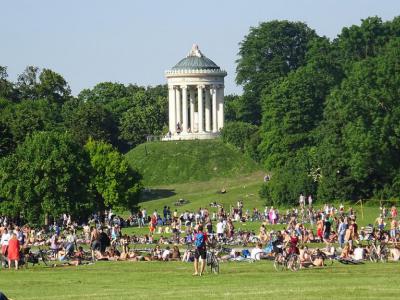 Munich’s English Garden is the largest publicly-owned park in Europe. Located in the heart of the city, it covers an area of 900 acres and is larger than New York’s Central Park.

Commissioned by Archduke and Elector, Carl Theodore, it was designed by American-born British physicist, Benjamin Thompson, who later became Count Rumford. The site chosen was once the hunting grounds of the Wittelsbach Royal family. It was opened to the public in 1792 as a three-mile long park along the Isar River. It gets the name from its design that was on the lines of informal gardens popular in the United Kingdom in the 18th and 19th centuries.

The English Garden is a popular place where the locals come to relax and play soccer. It is also a place where nude sunbathing is allowed. Attractions within the park include a monument to honor Count Rumford, a Japanese Garden created for the Munich Olympics, the Monopteros Apollo Temple and an amphitheater located in the north part. Four well-known beer gardens – the Chinese Tower, the Seehaus, Osterwald Garten and the Hirschau – are found here, too.

Why You Should Visit:
A large and sociable area with various routes to chose from and nice scenery, many places to eat, listen to music and swim or just dip your feet into the river water.
In it, among other things, you will find the popular 'Eisbach surfer' operating artificial wave outside all time of the year.
In the summer, it is also possible to visit the beer gardens at the Chinese Tower, where you can nowadays listen to traditional old-fashioned Bavarian music while sipping on a draft beer.

Tip:
Go there on a Sunday if you dare... there's not much else to do on Sunday in Munich, so all the locals put on their walking shoes and off they go.
If you enjoy swimming or would like to make use of the artificial wave system, be sure to bring a swim kit.
Many people ride bikes through the park, so keep your eyes open for speeding cyclists!
Image by Rosser1954 on Wikimedia under Creative Commons License.
Sight description based on wikipedia