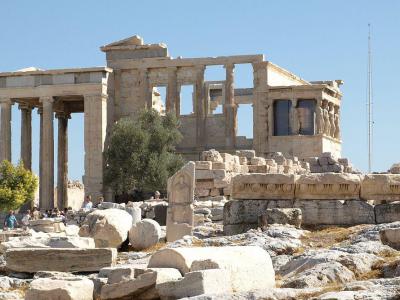 The Erechtheion forms part of the Acropolis and is one of the finest examples of Greek Ionic architecture. It was also the most sacred among temples on the Acropolis due to serving as a sanctuary of the city's main cults. The temple was dedicated to Athena – goddess of wisdom, Poseidon – the god of sea, and the snake-bodied hero Erechtonius. According to legend, this legendary hero was killed by Poseidon during the battle for the patronage of Athens.

Around 400 BC, the leader of Athens, Pericles commissioned sculptor and mason, Phidias to build the structure you may see today. It is made of marble and the friezes were of black limestone.

The temple has three main parts: the main temple, the northern and the southern porches. The main temple has two cellae, one dedicated to the Goddess of wisdom, Athena, and the other to the God of sea, Poseidon. It symbolized the reconciliation between the two after their battle for the patronage of Athens. The northern porch has Ionic columns and a Propylon. The most striking feature, however, is the famous porch of maidens. These six massive female figures seem to be supporting the porch roof on their heads. No other temple has such detail for pillars. The maidens are, in fact, plastic copies of the originals now housed in Acropolis Museum. This was done to prevent them from melting further in the caustic climate around Athens.

At night the temple's foundation lights up and illuminates the entire structure on the north side of Acropolis. It's a beautiful sight to see from a rooftop restaurant or bar within the vicinity.

Why You Should Visit:
Similar to the other temples on Acropolis, this one reflects the ancient Greeks boasting and passion for the powerful gods, glorious heroes, and honorable kings during their time.
At night the temple's foundation lights up and illuminates the entire structure on the north side of Acropolis. It's a beautiful sight to see from a rooftop restaurant or bar within the vicinity.

Tip:
Try and have a guided tour to experience the full explanations and history of the site. However, if you skip the tour, you can manage better at your own pace and time.
Also, make sure to visit early in the morning as it may get very hot later in the day and carry water as you won't get anything inside.