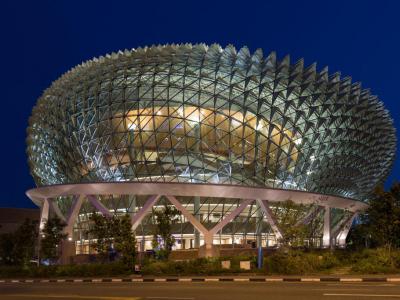 Esplanade – Theatres on the Bay, Singapore (must see)

Art and architecture go hand in hand, as evident in this spiky and endearingly outrageous performing arts center. The structure itself emerged from Singapore’s realization that it needed iconic buildings to keep pace with the competitive international tourist industry – and, as such, can be seen as the Asian rival to the Sydney Opera House, with a fabulous location to support its own unique sense of grandeur. Officially opened in 2002, it has become quite the key emblem of contemporary Singapore; a shining example of its arty, creative side.

The big question is and will always be whether the Esplanade’s theatres bear more resemblance to Durian fruit, the eyes of a fly, or a microphone. Despite its fruity nickname, “The Big Durians”, which is most popular with the locals, the twin glass domes of the complex do not take their design reference from the tropical fruit, but from traditional Asian reed weavings. The spiky metal sunshades reach seven thousand in number, and with their varying angles and geometries, make the roof-line morph and mutate across the building; however, aside from the visual complexity, they have a practical aspect as well, in that they maximize the natural light while shielding the glass roof from heat radiation – an important concern given Singapore's location close to the equator.

Internally, the venue is just as extraordinary. As well as large-capacity twin auditoriums that are visually and acoustically spectacular, there are several decent eating options here to fill one's tummy as well. Also worth looking out for here are the regular free performances and major events outside, especially on weekends, which are advertised either on the theatre’s website or in the monthly what’s-on guide so, on a lark, you may get to pick and choose several performances to see. The Esplanade has many different art-related shops as well, including a vinyl record store, a wind instrument shop and more. As if that's not enough, it houses a branch of the National Library where you can read digital newspapers, scour through the huge selection of music, dance, and art materials, or watch movies in a spectacular setting. To capture a very nice picture of the famed Singapore Merlion, you can go up to the top floor. This is indeed a heavenly refuge if you're an art lover or simply need a break from Singapore's humidity and heat.

Tip:
To capture a very nice picture of the famed Singapore Merlion, you can then go up to the top floor.