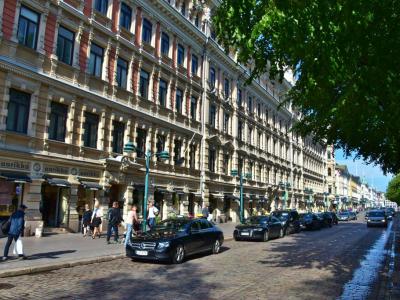 Between Erottaja Square and Market Square, you will find Esplanadi Park. Known simply as ‘Espa’ by the locals, this long promenade is a popular walking area. The park opened in 1818 and was designed by Carl Ludwig Engel. In 1827, Engels Teater was the first theater built in Helsinki.

Espa is a popular spot with locals to enjoy a picnic or see live performances. The central section of the park features roses bushes, crab apple trees, and aspen trees. You'll see many monuments and statues, including one of national poet Johan Ludvig Runeberg. He wrote the Finnish national anthem, and his was the first monument erected in Helsinki in 1885.

The Kappeli Restaurant opened in 1867, and it’s still known for great food in a beautiful setting. Espa Stage hosts live music throughout the year, including the longest music festival in Finland. It's held from May until the end of August and features 200 or more artists hosted by the Cultural Office of the City of Helsinki.

Why You Should Visit:
Beautiful open space in the middle of the city, great for sitting on the bench and people watching, or bringing food and having a picnic.

Tip:
Be sure to take in the architecture on both sides – the old buildings are splendid.
Image Courtesy of Flickr and Richard Mortel.