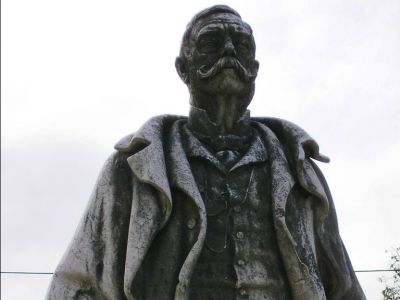 Flanking one of the entrances to Jardim da Cordoaria (Rope-Makers' Garden) in Porto, directly opposite the Carmelite Church (Igreja do Carmo), is a marble statue of José Duarte Ramalho Ortigão, the Portuguese journalist and writer.

Born in Porto in 1836, Ortigão dedicated himself to journalism and became a literary critic for the Diário do Porto in 1862; he also contributed to several literary magazines. At that period, romanticism was the dominant trend in Portuguese literature, led by several major writers, including Camilo Castelo Branco and Soares de Passos, all of whom influenced Ortigão in one way or another.

He also worked as a translator, and produced, in 1874, a Portuguese version of the English satirical novel, Ginx's Baby, by Edward Jenkins. During his lifetime, Ortigão wrote several books and distinguished himself by his lively and biting style. He died in Lisbon in 1915.

The monument, set on top of a granite pedestal, was created by Leopoldo de Almeida, and inaugurated in 1954.
Image Courtesy of Wikimedia and Manuel de Sousa.
Sight description based on Wikipedia.