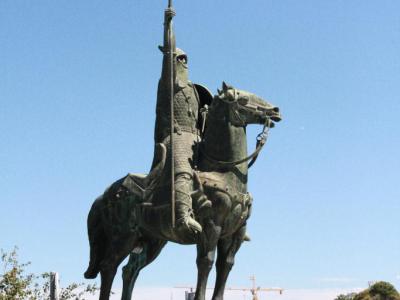 Vímara Peres was a ninth-century nobleman from the Kingdom of Galicia. Vímara was a vassal of the King of Asturias, Alfonso III, and was sent to reconquer and secure from the Moors (Arabs and Berbers who had invaded Visigothic Hispania), in the west coastal fringe of Gallaecia, the area from the Minho River to the Douro River, including the city of Portus Cale, later Porto and Gaia, from where the name of Portugal emerged.

He was able to expel the Moors and founded a fortified town under his own name Vimaranis (of Vimar) which later became Guimaranis, present day Guimarães (the Portuguese call it "The Cradle City"). Vímara Peres died in 873 in the territory of A Coruña.

Opened in 1968, this equestrian statue in bronze, made by the sculptor Barata Feyo, represents the mythical nobleman Vímara Peres.
Image Courtesy of Flickr and Fernando.
Sight description based on Wikipedia.