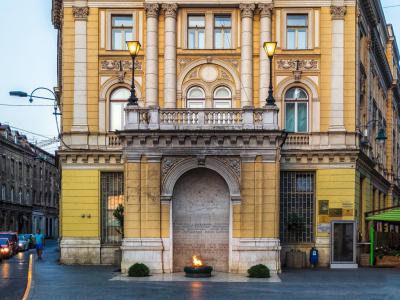 The Eternal flame is a memorial to the military and civilian victims of the Second World War in Sarajevo, Bosnia and Herzegovina. The memorial was dedicated on 6 April 1946, the first anniversary of the liberation of Sarajevo from the four year long occupation by Nazi Germany and the Independent State of Croatia. The memorial is located in the centre of Sarajevo at the corner the Marshall Tito street and the main Sarajevo pedestrian street, Ferhadija.

In the very early morning of Sunday, 2 January 2011, the Vječna vatra was suddenly, freakishly extinguished by (or self-extinguished before) a gathering of revellers, who quickly scattered. Yet, the Eternal flame was heroically reignited less than 20 seconds later by a passing tourist, who witnessed what had happened and ran up to risk life and limb in order to preserve the great Yugoslav memorial's continuity.
Image Courtesy of Flickr and Steven dosRemedios.
Sight description based on Wikipedia.