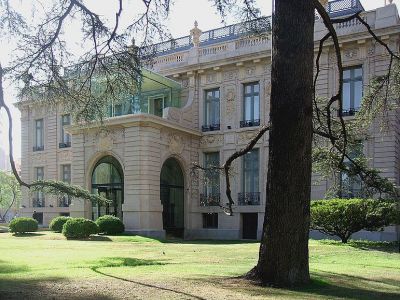 The museum maintains 12 exhibit halls, a sculpture garden, library, and an auditorium for 120. Its collection of over 500 works includes those by Emilio Caraffa, Juan Carlos Castagnino, Gustave Courbet, Pablo Picasso, Joaquín Sorolla, Lino Enea Spilimbergo and Ricardo Supisiche, among others. The museum hosts ongoing temporary exhibits, as well.
Image Courtesy of Wikimedia and Leandro A. Martínez.
Sight description based on Wikipedia.

Want to visit this sight? Check out these Self-Guided Walking Tours in Cordoba. Alternatively, you can download the mobile app "GPSmyCity: Walks in 1K+ Cities" from iTunes App Store or Google Play. The app turns your mobile device to a personal tour guide and it works offline, so no data plan is needed when traveling abroad.