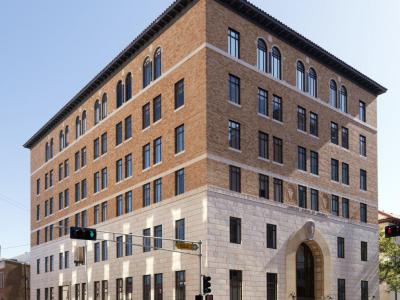 The Federal Building and United States Courthouse, built in 1930, is a historic landmark in downtown Albuquerque, New Mexico. It is part of the complex of federal buildings on Gold Avenue that includes the Old Post Office, Dennis Chavez Federal Building, and the Federal Building. The imposing six-story building, faced with limestone and buff-colored terra-cotta tile in a brick pattern with molded inlays, is topped with a Mediterranean-style red tile roof and a domed cupola. The cornerstone of the Federal Building lists James A. Wetmore as the architect. However, it is unlikely that Wetmore, who was the Architect of the Treasury and was not a trained architect, designed the building.

The lobby of the Federal Building contains a mural by Loren Mozley titled The Rebellion of 1680 which depicts the Pueblo Revolt. Another mural, Justice Tempered with Mercy by Emil Bisttram, adorns the wall outside the District Courtroom on the sixth floor. This historically significant courtroom originally served as the Federal Courtroom until the U.S. Court relocated to the Dennis Chavez Building in 1972. It was restored to its original appearance in 1981. The Federal Building was listed on the National Register of Historic Places in 1980.
Image by Carol M. Highsmith on Wikimedia under Creative Commons License.
Sight description based on wikipedia