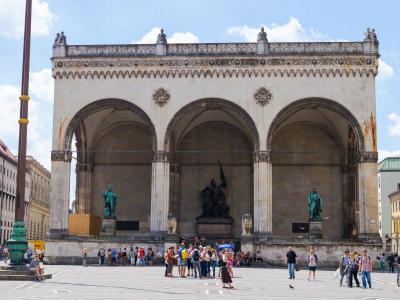 The Feldherrnhalle or Field Marshall’s Hall is a large loggia built to commemorate Bavarian military leaders and soldiers who fell during the Franco-Prussian War. The memorial was commissioned by King Ludwig I of Bavaria and designed by Friedrich von Gartner. It was built between 1841 and 1844 on the site of one of the old city gates, the Schwabinger Tor, at the southern end of Ludwigstrasse, near the Palais Preysing. The design was modeled on the Loggia dei Lanzi in Florence.

At the front, the building features large bronze statues of two revered Bavarian military heroes, Johann Tilly and Karl hilipp von Wrede, created by sculptor Ludwig Schwanthaler. In 1882, another sculpture paying tribute to the Bavarian army’s exploits during the Franco-Prussian war was created by Ferdinand von Miller Jr. and placed at the center. The steps leading up to the monument carry two lions, sculpted by Wilhelm Ruemann in 1906. The growling lion faces the Residenz Royal Palace while the other lion, with its mouth closed, faces the church.

The place is best remembered, however, for the skirmish between the Bavarian Police and Hitler’s followers in 1923, called the Beer Hall Putsch, resulting in the future Fuhrer and his supporters being arrested.
Image by Sarah L. Donovan on Flickr under Creative Commons License.
Sight description based on wikipedia