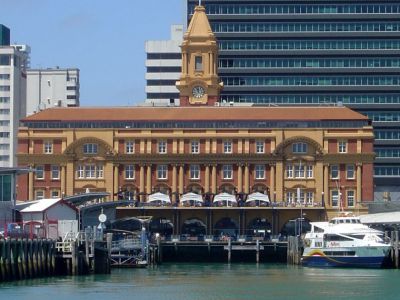 The Auckland Ferry Terminal or simply Ferry Building is one of Auckland’s landmark buildings located right in the city’s downtown area. The site known as the Ferry Building is actually comprised of two parts known as the Old and New Buildings. The Old Building is constructed of sandstone in the Edwardian Baroque style and was completed in 1912. The impressive nature of the building demonstrates the importance of water transport in Auckland at the beginning of the 20th century. Originally the building was put to use as a terminal as well as space for the trade unions and consulate offices as well as those of the ferry companies, but in the 1980s it was refurbished and turned into retail space.

In recognition of the importance that the building holds in the growth, development and history of Auckland, it is now registered with the Historic Places Trust. Most of the actual ferry operations have now been moved to the New Building, which has modern piers and appropriate space for the current ferries in use today. The New Building was designed to appear as ships that are anchored behind the original Ferry Building. Auckland is one of the world’s great harbour cities and a stroll through the Ferry Building and a trip out onto the water are a must.

Tip:
Whether or not you're taking a cruise from Auckland, give yourself time to walk around and in this building.
Also, take the time to get yourself a very tasty gelato from the store there and enjoy the view at the harbor.
The outdoor seating facing the waterfront tops the experience off. Public restrooms are a few steps away.
Image by Follash on Wikimedia under Creative Commons License.