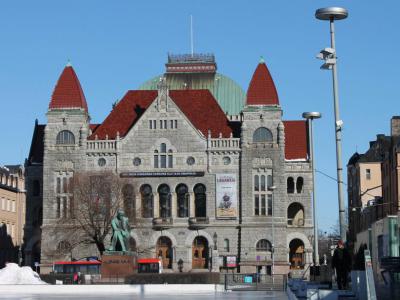 The National Theatre has been an integral part of Finnish national culture since the 1800s. It got its start in 1872 in Pori. Today, it is located in the north-central section of Helsinki, near the Central Railway Station. It is the oldest known theater of its kind that does performances in Finnish. Up until the year 1902, it was simply called the Finnish Theater.

The current building was completed in 1902 and was done in a Romantic architecture style. At this point in history, the whole country was undergoing a cultural movement which came to be known as Romantic Nationalism, as the people sought to preserve their cultural identity against outside pressure.

Just outside the front entrance is a statue of the famous Aleksis Kivi, who is known for his Romantic novels and short stories. Along with the theater, the arts were used as a way to try to stand up to the oppression of the Russian Empire of the day.

Today the theater travels to many foreign locations but has not lost its central purpose of maintaining the drama of Finland. So, you can see their kind of avant-garde style of international drama set alongside productions that are designed to continue Finnish language performances. Go if you get the chance and take in a performance.

Why You Should Visit:
Very architecturally pleasing, photogenic, and the smaller stage productions bring the magic.