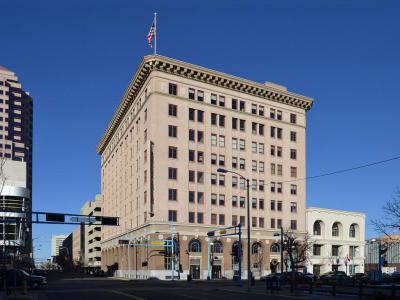 The interior of the first floor is done almost entirely in grey streak marble, and features 28-foot-tall vault ceilings. The building was owned by First National Bank until 1999, when it was purchased by a private developer with the intent to convert it into a luxury hotel. Plans later changed, and the building was instead remodeled into a high-end condominium project called The Banque Lofts, which opened in 2006.
Image by Camerafiend on Wikimedia under Creative Commons License.
Sight description based on wikipedia