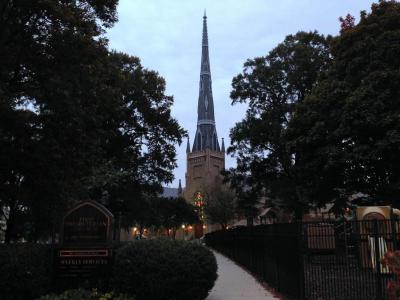 First Presbyterian Church is a historic Presbyterian church located in Charlotte. It was built in 1857, and is a one-story, Gothic Revival style stuccoed brick building. The original spire was rebuilt in 1883-1884 and the side and rear walls of the church were taken down and a new structure was erected in 1894–1895.

It was added to the National Register of Historic Places in 1982.
Image Courtesy of Wikimedia and Dmadeo.
Sight description based on Wikipedia.