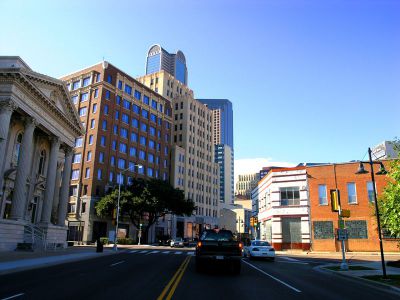 The exterior walls contain the original pictorial windows of "art glass." These were prepared by the Kansas City Stained Glass Works Company and shipped to Dallas in 1912. The interior design is a modified Akron Plan. The Akron plan was developed by Akron, Ohio architects (1900–1920) to promote efficiency of movement by congregants between worship and Sunday School. This plan is characterized by a semicircular amphitheater with curved seating, opening to classrooms immediately adjacent to the Sanctuary.
Image Courtesy of Drumguy8800.
Sight description based on Wikipedia.