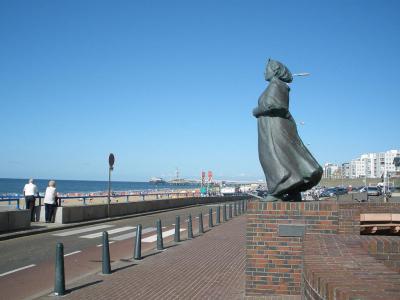 Adjacent to the boulevard of Scheveningen, a fishermen's monument was again unveiled in 1982. It is a statue, depicting a fisherwoman from Scheveningen in traditional costume. It is located at the so-called head of the Keizerstraat, the later so-called Kalhuisplaats. The woman's gaze is symbolic because it is inexorably directed to the sea from which she could one day expect one or more of her lovers - her suitor, her husband, her son or her father.

The statue was made by the sculptor and goldsmith Gerard Bakker and it was unveiled on November 10, 1982 by the then Queen Beatrix. For a number of years there has been an annual commemoration that starts in the local Old Church and which is then moved to the statue. On the spot, Inge Lievaart's poem on the pedestal is recited, followed by a wreath laying and a flower greeting. The poem reads:

The Sea, Which Always Take Again
Will Return Once
All Who Stayed
To Him Who Escape First
The Lord Of Wind And Water
To Christ Triumphator
Image Courtesy of Wikimedia and Jvhertum.
Sight description based on Wikipedia.