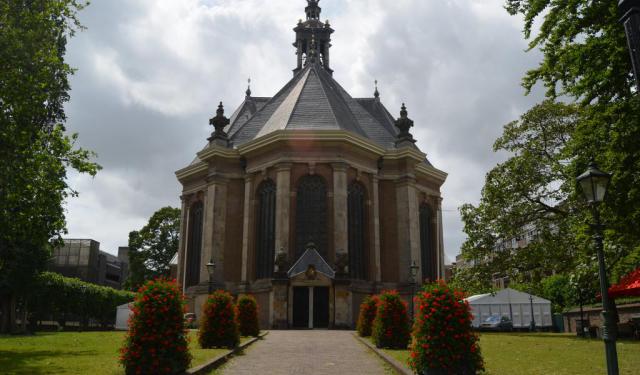 Image by Pedro on Flickr under Creative Commons License.

A number of buildings in the center of The Hague were built in medieval times under the feudal system. In the Netherlands these historic buildings are often located on the river, which adds to their beauty. Explore The Hague's fascinating past with this tour of the city's medieval architecture.
How it works: Download the app "GPSmyCity: Walks in 1K+ Cities" from iTunes App Store or Google Play to your mobile phone or tablet. The app turns your mobile device into a personal tour guide and its built-in GPS navigation functions guide you from one tour stop to next. The app works offline, so no data plan is needed when traveling abroad.

Nieuwe Kerk is a highly unique Protestant church of the 17th century design. While the majority of Protestant churches at the time preferred a rounded floor plan, architect Pieter Noorwits designed two hexagonal areas, acting in accordance with the Protestant principle of centralization. Building of Nieuwe Kerk began in 1648 at the time of Protestant conquest in The Netherlands, and it was finished just a year later.
Image by Suicasmo on Wikimedia under Creative Commons License.
Sight description based on wikipedia
2

The Ridderzaal (Knight's Hall) is the main building at the Binnenhof in the Hague, which is used for official royal receptions, and inter-parliamentary conferences. In the 13th century Floris IV, Count of Holland bought a piece of land next to a small lake to build a house on. The Knight's Hall was built on this estate in the 13th century.

Over the centuries, the government buildings developed around this lake. From the early 17th century, the Knight's Hall became an important trading place for booksellers. In later centuries it served a variety of purposes - as a market hall, a promenade, a drill hall, a public record office, a hospital ward, even the offices of the state lottery. It was restored between 1898 and 1904 to serve its present purposes.

The Knight's Hall is a 40 by 20 meters large Gothic hall has magnificent stained glass windows depicting the coats of arms of Dutch towns; particularly fine is the rose window with the arms of the principal noble families of the Netherlands. The heavy timber roof structure with its 18-metre-long beams (59 ft) has the appearance of an upturned ship. Wooden heads symbolizing eavesdroppers from the higher powers are supposed to deter members of the assembly from lying.

Image by Zairon on Wikimedia under Creative Commons License.
Sight description based on wikipedia
3

The history of Kloosterkerk begins around 1400. In 1393, the land where the present church is located was given to the Amsterdam St. Andrew Monastery, which sold the land in 1394. At that time, there were several castles in the area, yet by the end of the fourteenth century all of them had been demolished. In 1420, the church suffered a major fire. The government of Holland for many decades had kept their documents in the church. Back in the 15th century it was significantly smaller than today. In about 1540 the church was enlarged.
Image by Chris06 on Wikimedia under Creative Commons License.
4

The Pagehuis is near the monastery church. In 1625, the church built a house beside the main cannon foundry. This house was state property. Its facade is decorated with the heads of war gods Mars and Bellona. Between the 19th and 20th century, the Pagehuis served as the headquarters of the Red Cross, and in 1912 the President of the Red Cross restored the property.
Image by Ben Bender on Wikimedia under Creative Commons License.
5

Kneuterdijk Palace is a former royal palace of the Netherlands located in The Hague, nowadays the seat of the Council of State (Raad van State).

Built in 1716 in the Louis XIV style by architect Daniel Marot, it was commissioned by Count Johan Hendrik of Wassenaer-Obdam, member of the House of Wassenaer. The palace served as a residence for King William II of the Netherlands and his wife Queen Anna Paulowna in the first half of the 19th century, when he was still the crown prince. William II added several buildings designed in the English Tudor style, of which only the so-called “Gothic Hall” has survived. The hall was designed after the great dining hall of Christ Church, Oxford, of which William II was an alumnus.

Their grandson Crown Prince William used the palace from 1858 till his death in 1879. In the 1930s the place was occasionally used by Princess Juliana. After World War II Dutch war criminals were tried in the former ballroom, some of whom were sentenced to death. Then the Ministry of Finance used the building for many years. Since restoration work was completed in 2001 the palace has been in use by the Netherlands' Council of State.

The Council of State is a constitutionally established advisory body in the Netherlands to the government and States General that officially consists of members of the royal family and Crown-appointed members generally having political, commercial, diplomatic or military experience. It was founded in 1531, making it one of the world's oldest still-functioning state organisations.

Image by Jungpionier on Wikimedia under Creative Commons License.
Sight description based on wikipedia
6

The Mennonite Church is one of a small number of Neo-Romanesque churches in The Hague. It was constructed by the Mennonites in 1885-1886 as a reaction to the ornate Neo-Gothic style. K. Stoffels designed the church, which is distinguished by its wonderful triangular section of wall that has a rose window in the center of it.
Image by Rudolphous on Wikimedia under Creative Commons License.
7

Noordeinde Palace is one of the three official palaces of the Dutch royal family. Located in the Hague in the province of South Holland, it has been used as the "working palace" for Queen Beatrix since 1984. The palace originally started as a medieval farmhouse, which was converted into a spacious residence by the steward of the States of Holland, Willem van de Goudt in 1533. The original farmhouse's cellars can still be seen in the palace basement. Between 1952 and 1976 the Institute of Social Studies was based in the north wing of the palace. The gardens of the palace are open to the public.
Image by Wikifrits on Wikimedia under Creative Commons License.
Sight description based on wikipedia
8

The Koninklijke Stallen is a multifaceted building in the heart of The Hague, adjacent to the Paleis Tuin and Palace Noordeinde. The building was designed by H.P. Bird and opened between 1876 and 1879. It is has been declared a state monument. In close proximity to The Koninklijke Stallen are the buildings where The Golden Coach and horses of the royal family (since 1898) are kept.
Image by Michiel1972 on Wikimedia under Creative Commons License.
9

In addition to hosting these institutions, the Palace is also a regular venue for special events in international policy and law. The Palace officially opened on August 28, 1913, and was originally built to provide a symbolic home for the Permanent Court of Arbitration, a court created to end war which was created by treaty at the 1899 Hague Peace Conference.

The building is in the Neo-Renaissance style which was designed by French architect Louis M. Cordonnier. The palace initially has one big bell tower in front and one small one in the back.

The Palace is filled with many gifts of the different nations who attended the Second Hague Conference as a sign of their support. Among the gifts are a 3.2-tonne (3.1-long-ton; 3.5-short-ton) vase from Russia, doors from Belgium, marble from Italy, a fountain from Denmark, wall carpets from Japan, the clock for the clock tower from Switzerland, Persian rugs from Persia and wood from Indonesia and the United States of America.
Image by Peegmehh on Wikimedia under Creative Commons License.

This sea-side resort was originally an independent fishing village, but soon came to be part of greater city of The Hague. Its inhabitants still maintain a sense of local identity, however. The resort has a history of long royal and well-to-do visitors with the Kurhaus as its main attraction. The area gets very crowded in summer. For large-scale nightlife, most city dwellers prefer Scheveningen to...  view more