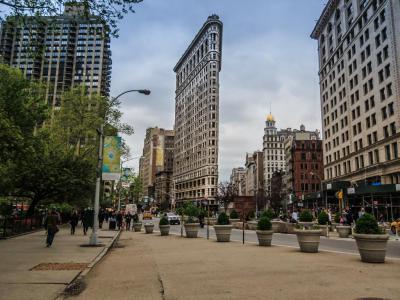 Perhaps the most photographed edifice in New York City, the Flatiron Building owes its popularity and name to the unique design. The isosceles triangle-shaped building may not be as high as the nearby high risers of today, but when it opened its doors for the first time in 1901, it surely was one of the tallest in New York – 307 feet, 21 floors – rising like a Greek column, contrary to the other New York skyscrapers rising from a lower base block.

The Flatiron building was designed by Chicago architect, Daniel Burnham, as an office building for the Fuller Construction Company. Styled renaissance palazzo with beaux art detailing, it has the exterior of steel clad with terra cotta. Upon inauguration, the building was dubbed Burnham’s Folly by skeptics who doubted it would stand against strong winds. The design, however, has defied their misgivings and remained structurally sound till the present. Nowadays, it houses the headquarters of the McMillan Publishing Company.

The Flatiron building symbolizes New York City in picture postcards, television commercials and documentaries. It became a New York City landmark in 1966 and was added to the National Register of Historic Places in 1976.

Why You Should Visit:
The exterior of the structure is certainly unique and well worth a photo!

Tip:
At the crossroads between 5th Avenue and Broadway, this should be not the only attraction in the area. The district is trendy, and you can sit outside at one of the many local cafes or in Madison Square Park and just watch people go about their lives all day long. Alternatively, if you're more creatively inclined, the area has plenty of stores catering to those loving artistic design, as well as hip cafes and restaurants.