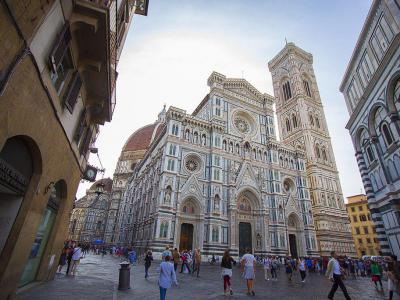 Presiding over the city of Florence, the Duomo Cathedral is a Renaissance masterpiece renowned for its masonry dome, the largest in the world. Completed in 1465, this dome is a double shell and is entirely self-supporting.

The Gothic-style Cathedral itself took nearly 170 years to build, starting from 1296. It wasn't until the mid 1400s that its true identity was found, courtesy of the architect Filippo Brunelleschi, who was commissioned to the project after many others had given up on it. Brunelleschi looked for engineering solutions to the great dome of Pantheon in Rome, and experimented with large-scale models and specially-designed machinery.

In particular, to lift 37,000 tons of material, including over 4 million bricks, he invented machines and lewissons for hoisting large stones. Fascinated with this machinery, the then young apprentice Leonardo da Vinci made series of sketches, for which, later on, he was often credited for the actual invention. Despite that, however, Brunelleschi's name never fell into the oblivion and today a huge statue of the architect is set firmly in the piazza before the Cathedral.

The mixture of marbles seen outside is just as outstanding and represents a unique combination that looks rather like paint than a piece of rock art.

***DANTE'S FLORENCE TOUR***
Inside the Dome, just before the presbytery, on the left aisle wall, you can see the “Dante and the Divine Comedy” fresco by Domenico di Michelino. This painting depicts Dante (1265-1321) with a copy of his Divine Comedy book next to the entrance to Hell, the seven terraces of Mount Purgatory, and the spheres of Heaven above. The painting was made in 1465, to mark the poet's bicentenary, and replaced an earlier painting of him in exactly the same spot.

What's also interesting is that, apart from the Divine Comedy scenes, it shows images of 15th-century Florence, which Dante himself could not have seen in his lifetime. This, in turn, makes it a most valuable historical artifact. To see it up close, you'll have to climb some 450 steps up the narrow and spiraling stairs, circumnavigating the dome on the inside.

Tip:
When buying a ticket online, make sure to use of the free ticket that comes with it, in order to climb to the top, where you can step out and see the panoramic view of Florence, the adjoining Tuscan scenery and mountains. You have to make a separate booking for that too, although free of charge.