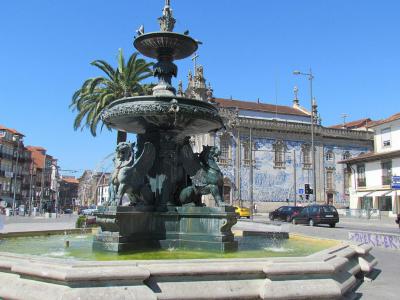 The Fonte dos Leões (Fountain of the Lions), located on Plaza de Teixeira Gomes, is a 19th-century fountain built by the French company, Compagnie Générale des Eaux pour l'Etranger. Cast by the Val d’Osne foundry in France, this is one of the most beautiful fountains in Porto, and is a copy, for the most part, of the fountain in the Town Hall Square of Leicester, England.

In 1882, Porto authorities initiated a water supply project, meant to improve access to water for the population. Pursuant to this project was the creation of the Lions Fountain.

General works commenced in 1883. The municipal commission initially rejected the design and it was only in 1885 that they finally approved the one supplied by Carlos de Pezerat. Construction began on 25 September, and the water began to flow on 19 December 1886. By 1 January 1887, the public water supply project for the city of Porto was concluded.

The central part of the fountain has a cruciform layout with a group of sculptures at the base, supported by four seated lions on the extremes; hence the name.
Image Courtesy of Wikimedia and Marcio.