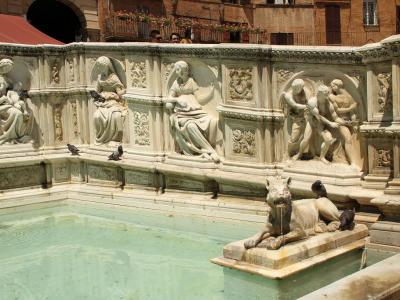 The Gaia Fountain is a monumental fountain located opposite the Public Palace on the high side of Campo Square in Siena. Surrounded by fences, the fountain is a protected monument in the city. The Gaia Fountain was designed by local sculptor, Jacopo della Quercia, in 1419, in keeping with the style traditional for Sienese fountains. It consisted of a rectangular basin surrounded by a high parapet on three sides. The parapet was covered with bas reliefs. The bas reliefs depicted the creation of Adam and the flight from the Garden of Eden. The long section has a statue of the Madonna and the Child surrounded by allegories of the virtues.

The fountain was placed on the site of a previous one, created in 1346. It got its name from the celebrations that took place when water flowed from the fountain for the first time. Legend holds that the fountain was met with much joy, and thus the name Gaia or joyous. Others suggest the term Gaia refers to the Latin term for "bride", and that the fountain was dedicated to the bride of God and patron of Siena, the Virgin Mary. The original panels, created by Jacopo della Quercia, fell into disrepair in the 19th century. Tito Sarrochi reproduced the originals, while the old panels were removed and displayed in the loggia of the Public Palace.
Image by Shesmax on Wikimedia under Creative Commons License.