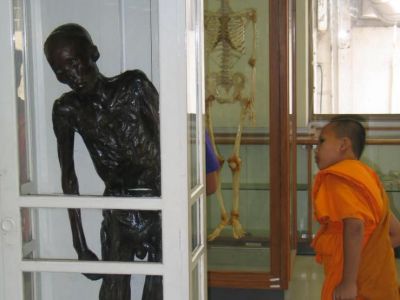 Siriraj Medical Museum, located in Siriraj Hospital, consists of several medical museums including the Forensic Medicine Museum. The museum is open to the public and is a valuable source of information both for medical professionals and laymen. It has a large collection of important specimens related to the modern history of medicine in Thailand. The museum contains six permanent exhibits and a temporary exhibit. The six sections with permanent exhibits address the following fields: anatomy, pathology, congenital disorders, toxicology, Thai traditional medicine and forensic pathology.

In the 1950s, Si Ouey Sae Urng was a cannibal serial killer who preyed on children. He was convicted and executed. Mummified remains of this first serial killer in the modern history of Thailand are on display in the forensic medicine section of the Siriraj Medical Museum. There are also displays of skulls and other body parts in glass cases, many of them victims of murder by various means.

There are also instances of births gone wrong. Conjoined twins are preserved and kept here, providing you the opportunity to look at them closely. You will become intimately acquainted with embalmed bodies of murderers, exhibits of ghastly deaths, and the pictures gathered from murder scenes. A crowd-pleaser is the standing, wax-filled remains of noted 1950's cannibal, Si Quey. The cannibal's body has been filled with paraffin and put on display. The neatly hand-lettered sign notes that he killed "because he loves to eat human's organ not because of starving."

Siriraj hospital is also the first medical college of Thailand that has been training doctors and nurses for more than a century. Several significant contributions in nearly every aspect of medical care and public health with support from large number of Siriraj illuminists, have brought trust and respect to this hospital at national and international levels.

Also on display is the head of a victim of a gunshot on head. Wound to the head is neatly sawed in half lengthwise to illustrate the path of the bullet-hole. The whole head is neatly encased in sealed glass filled with formaldehyde. You can also see photos about train wrecks, fatal car accidents, and motorcycle decapitations that newspapers worldwide refuse to print. "Crush injury by machine" is particularly illustrative as is "blast force injury (hand grenade)." If you have a brave heart and have a flair for medical cases, you must visit this museum.
Image by Bobby on Wikimedia under Creative Commons License.