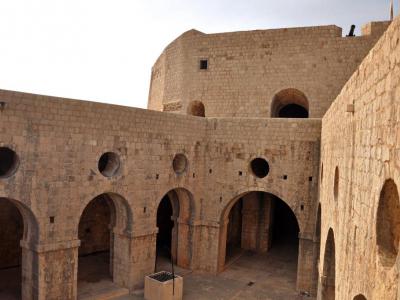 Fort Lovrijenac or St. Lawrence Fortress, also dubbed "Dubrovnik's Gibraltar", is a fortress and theater outside the western wall of the city, soaring 37 metres (121 ft) above sea level. Famous for its plays and importance in resisting Venetian rule, it overshadows the two entrances to the city, from the sea and by land.

Chronologists date the fort's origin to either 1018 or 1038. Early in the 11th century, the Venetians attempted to build a fortification on the same spot where Fort Lovrijenac currently stands. If succeeded, they would have kept Dubrovnik under their power, but the people of the city beat them to it. When the Venetian ships arrived filled with construction materials for the fort, they were told to return to Venice.

The Chronicles of Ragusa reveal how the fort was built within just three months and from then on was constantly reconstructed. The first record of its existence, however, appeared only in 1301 when the council voted on the Fort Commander.

*** Game of Thrones Tour ***
Fort Lovrijenac also gained fame as the recognizable Red Keep double in King’s Landing, frequently appearing in Season 2 and Season 3 of Game of Thrones. In particular, it was the location for King Joffrey’s naming ceremony in Season 2, Episode 1 ‘The North Remembers’ where a celebrating tournament was held.

Later in the same episode, the Red Keep is where Cersei confronts Littlefinger and he tells her ‘Knowledge is power’ to which she exclaims: ‘Power is power’. It is also the destination where King Joffrey is headed after being attacked at Pile Gate and where Tyrion slaps him across the face.
Image by Jennifer Boyer on Flickr under Creative Commons License.
Sight description based on wikipedia