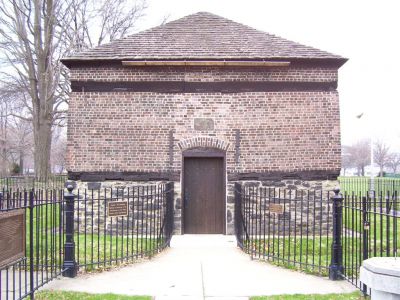 Fort Pitt had been completed in 1761 and survived a difficult siege in 1763 during Pontiac's Rebellion. Although the Blockhouse resides within the boundaries of Point State Park, it is owned and operated by the Fort Pitt Society of the Daughters of the American Revolution. The DAR allows visitors to the park to tour the structure. The building is recognized by the National Register of Historic Places as being the sole surviving historical building in the "Forks of the Ohio (Site of Fort Duquesne and Fort Pitt, Bouquet's Blockhouse)" historic place.

This sight is featured in a self-guided walking tour of Pittsburgh, Pennsylvania within the mobile app "GPSmyCity: Walks in 1K+ Cities" which can be downloaded from iTunes App Store or Google Play. Please download the app to your mobile phone or tablet for travel directions for visiting this sight. The app turns your mobile device to a personal tour guide and it works offline, so no data plan is needed when traveling abroad.

Pittsburgh features a rich history and is home to various religious buildings and places of worship. Several of the city’s churches represent historic landmarks and date back to the 19th century. Religious buildings like these are open to the public and highly recommended during your visit.

Pittsburgh is home to various museums which depict everything from history to modern art. Visitors may learn about the city’s early history at Senator John Heinz History Center and Fort Pitt Museum, appreciate installation art at Mattress Factory Museum, admire works of Andy Warhol at Andy Warhol Museum, and have fun at two other Pittsburgh museums dedicated to children. Pittsburgh is also home...  view more