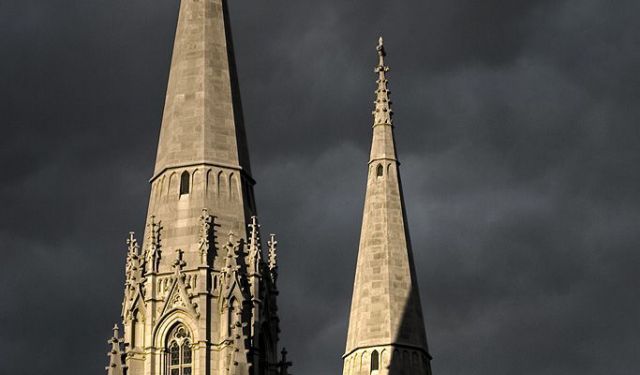 Pittsburgh features a rich history and is home to various religious buildings and places of worship. Several of the city’s churches represent historic landmarks and date back to the 19th century. Religious buildings like these are open to the public and highly recommended during your visit. This self guided tour takes you to some of the oldest churches in downtown Pittsburgh.
Image Courtesy of Wikimedia and Joey Gannon.
How it works: Download the app "GPSmyCity: Walks in 1K+ Cities" from iTunes App Store or Google Play to your mobile phone or tablet. The app turns your mobile device into a personal tour guide and its built-in GPS navigation functions guide you from one tour stop to next. The app works offline, so no data plan is needed when traveling abroad.

The First Presbyterian Church is nestled among the high rises of downtown Pittsburgh. The Neo-Gothic designed church was built in 1905 by Theophilus P. Chandler Jr. It has 253 stained glass windows, 13 of which were painted by hand by Tiffany Studios. The church has a wooden ceiling and a pipe organ with 4,400 individual pipes in a Baroque-style casing.

Visitors are welcome to the church service on Sundays where they can worship while also admiring the interior architecture. Those who prefer to view the church's exterior still have plenty to admire.

Along with the building's facade, tourists can step next door to view the historic cemetery, which is located between the First Presbyterian Church and Trinity Episcopal Cathedral. The Trinity Burying Ground is the oldest cemetery in Pittsburgh. Some of the graves date to the 1800s, including that of congressperson James S. Stevenson.

Image Courtesy of Wikimedia and Cbaile19.
2

Trinity Cathedral is the cathedral for the Episcopal Diocese of Pittsburgh. The present Gothic church, the third structure to hold the congregation, was completed in 1872 on the site of a hilltop cemetery. The site, centered on a terrace above the historic "point" (where the Allegheny River and the Monongahela River join to form the Ohio River) was sacred to Native Americans as a burial ground. Early settlers also used this site as a cemetery. The congregation built its second church here in 1824.

The Trinity Churchyard has the oldest marked graves west of the Atlantic Seaboard, of both Native American leaders, French, English, and American colonists. The first Trinity Church was built two blocks to the west of this burial ground at the base of the hill or terrace initially. It was constructed from the 1780s to 1805.

In 1824 Trinity moved to its current site in the middle of the terrace churchyard with what is regarded as the first gothic structure in Western Pennsylvania. John Henry Hopkins led the design and construction of the cathedral, which was complete with butresses, a tower, pointed arches and a vaulted ceiling. In 1872 the new Trinity Cathedral was completed. It was the tallest building in the city until the construction of the Allegheny County Courthouse in 1888.

Image Courtesy of Flickr and David Wilson.
Sight description based on Wikipedia.
3

The First English Evangelical Lutheran Church (or First Lutheran Church in short) was founded in 1837 as the First English-speaking Lutheran church. The current church building was completed in 1888. The building is known for some beautiful pieces of ecclesiastical art, namely the mosaic of the Presentation above the altar, the tabernacle, the Good Shepherd window, and the free-standing altar.

For example, the Good Shepherd window in the north wall of the nave above the choir space came as a gift in 1898. This large window consists of more than 500 square feet of Tiffany Favrile glass. The image depicts in the center the Good Shepherd stands in the midst of his sheep, hands clasped and eyes toward heaven, interceding for his flock. The Good Shepherd are accompanied by two angels on each side, one holding the torch of faith together with the book of knowledge and the other holding a palm of victory in one hand and a crown of stars in the other.

If you are in the area, it is definitely worth paying the church a visit to see the beautiful arts in your own eyes.
Image Courtesy of Wikimedia and Cbaile19.
4

4) Divine Mercy Parish (formerly known as Church of the Epiphany)

The building is a red brick Romanesque structure with a byzantine architecture flavor. The beautiful stained glass windows were installed between 1903 and 1910. On one side of the windows, the images depicts stories from the New Testament; on the other side, the images told the stories of the Old Testament.

Marble for the sanctuary was imported from Italy. The marble canopy over the main altar contains the extraordinary Venetian mosaic tympanum of the Visit of the Magi, and on the upper arch the enameled mosaic of the Lamb of God.

Divine Mercy Parish is located in the heart of downtown Pittsburgh and welcomes visitors during its opening hours.
Image Courtesy of Wikimedia and HoboJones.
5

Church of St. Benedict the Moor, built in 1894, is a Roman Catholic church in the Hill District neighborhood of Pittsburgh. The 18-foot tall statue of St. Benedict the Moor was created by American painter and sculptor, Frederick Charles Shrady, and was installed atop its tower in 1968. Shrady was best known for his religious sculptures.

The Patron of the church, Benedict the Moor, was born near Messina, Italy in 1526. He was the son of African slaves who later became Christians. Benedict was known as the "Holy Negro" during his time. He is the heavenly protector of the city of Palermo and the patron saint of blacks in North America. His feast is celebrated on April 4th.

The building was added to the List of Pittsburgh History and Landmarks Foundation Historic Landmarks in 1998.
Image Courtesy of Wikimedia and Trevin Shirey.