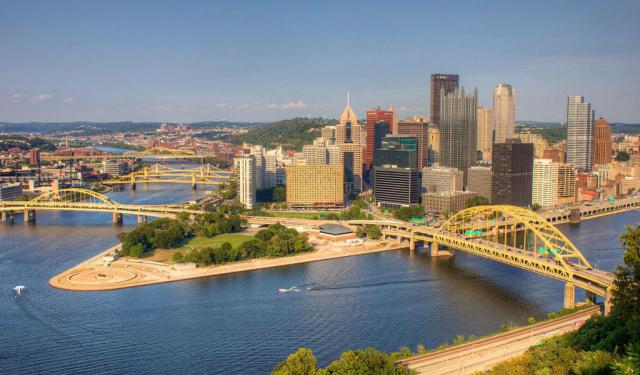 If you want to see what Pittsburgh looks like from above, take this self-guided walk. To reach the top of Mount Washington, use one of the two operating inclines (Duquesne Incline or Monongahela Incline), walk along the Grandview Avenue, then take the other incline back to the downtown. There are plenty of restaurants and cafes on the Grandview Avenue, should you need a place to sit down and enjoy the view. This guarantees to be one of the most scenic walks in your life.
Image Courtesy of Wikimedia and Jiuguang Wang.
How it works: Download the app "GPSmyCity: Walks in 1K+ Cities" from iTunes App Store or Google Play to your mobile phone or tablet. The app turns your mobile device into a personal tour guide and its built-in GPS navigation functions guide you from one tour stop to next. The app works offline, so no data plan is needed when traveling abroad.

The Duquesne Incline is a funicular located near Pittsburgh's South Side neighborhood and scaling Mt. Washington in Pittsburgh.

Originally steam powered when first completed in 1877, the Duquesne Incline was built to carry cargo up and down Mt. Washington in the late 19th century. It later carried passengers, particularly Mt. Washington residents who were tired of walking up footpaths to the top. Inclines were then being built all over Mt. Washington. But as more roads were built on “Coal Hill” most of the other inclines were closed. By the end of the 1960s, only the Monongahela Incline and the Duquesne Incline remained.

In 1962, the incline was closed, apparently for good. Major repairs were needed, and with so few patrons, the incline's private owners did little. But local Duquesne Heights residents launched a fund-raiser to help the incline. It was a huge success, and on July 1, 1963, the incline reopened under the auspices of a non-profit organization dedicated to its preservation.

The incline has since been totally refurbished. The cars have been stripped of paint to reveal the original wood. An observation deck was added at the top affording a view of Pittsburgh's "Golden Triangle", and the Duquesne Incline is now one of the city's most popular tourist attractions.

Image Courtesy of Wikimedia and ccbarr.
Sight description based on Wikipedia.
2

The park is named for a landmark 2006 public sculpture in bronze, Point of View. The piece depicts George Washington and the Seneca leader Guyasuta, with their weapons down, in a face-to-face meeting in October 1770, when the two men met while Washington was in the area examining land for future settlement along the Ohio River.

Before the dedication of the park in October 2006, it had been known by locals as "Photography Park" because of its popularity with tourists who perched on the concrete overlook taking pictures of the cityscape below.
Image Courtesy of Wikimedia and Raman Patel.
Sight description based on Wikipedia.
3

Built in 1870, the Monongahela Incline is the oldest continuously operating funicular in the United States. It is also one of two surviving inclines (the other is the nearby Duquesne Incline) from the original 17 passenger-carrying inclines built in Pittsburgh starting in the late 19th century.

Pittsburgh's expanding industrial base in 1860 created a huge demand for labor, attracting mainly German immigrants to the region. This created a serious housing shortage as industry occupied most of the flat lands adjacent to the river, leaving only the steep, surrounding hillsides of Mt. Washington or "Coal Hill" for housing. However, travel between the "hill" and other areas was hindered by a lack of good roads or public transport.

The predominantly German immigrants who settled on Mt. Washington, remembering the seilbahns (cable cars) of their former country, proposed the construction of inclines along the face of Coal Hill. The result was the Monongahela Incline, which opened on May 28, 1870.

Today the Monongahela Incline is operated by the Port Authority of Allegheny County, which also operates the of Pittsburgh's transit system, mainly as a tourist attraction. The Monongahela Incline takes visitors to the top of Mount Washington where they enjoy a spectacular view of the downtown Pittsburgh and beyond.
Image Courtesy of Flickr and Brent Moore.
Sight description based on Wikipedia.