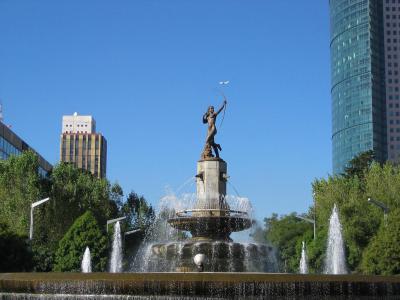 The fountain of Diana stands on a roundabout near the Paseo de Reforma in Mexico City. The statue of Diana the Huntress is depicted by the sculptor as aiming her bow and shooting the arrow to the skies.

In 1942, architect Vincente Mendiola and Sculptor Juan Olaguibel were commissioned to build a fountain in a roundabout near the entrance of Chapultepec Park on the Reforma Avenue. The commission was the result of a beautification drive of Mexico City by the then President, Manuel Avila Camacho. A 16 year old secretary, Helvia Martinez was chosen as a model for the fountain. She posed for the sculptor for free knowing that her body would be immortalized in a landmark of Mexico City. On October 10th 1942, the statue was inaugurated. Some sections of the population appreciated the sculpture while ultra conservative sections of society called the Decency League protested against the nude depiction of Diana and forced the artist to put underwear on the statue. Before the 1968 Olympics, it was decided to remove the underwear but the attempt damaged the statue. The statue was removed to Ixmiquilpan, the home town of Juan Olaguibel. By popular demand by artists and citizens, the statue was restored in 1992.

The roundabout at the entrance to Chapultepec Park is decorated by a beautiful fountain and a sculpture that remains a fitting tribute to artistic freedom that survives despite setbacks.
Image by Clinker on Wikimedia under Creative Commons License.

Zona Rosa, or The Pink Zone is one of the Mexico City's famous neighborhoods. It is located near the historic center of the city. The neighborhood was called the Pink Zone because of the pink tiles that are prevalent here. The area offers amazing Beaux-Art architecture, the city's best handicraft markets and antique shops. Take this walking tour to discover the beauties that Zona Rosa...  view more

Chapultepec Park is one of the most famous parks in Mexico City. It is located on the Chapultepec Hill, that has a major historic importance for Mexicans. This park features some of the best known tourist attractions in Mexico city, like the Tamayo Contemporary Art Museum, Chapultepec Castle, and Papalote Children Museum. Take this walking tour to explore Chapultepec Park.